Next week's economic diary is a busy one, including the US FOMC meeting, the worldwide release of October services PMI surveys and UK GDP.

No change in US interest rates is generally expected at the November FOMC meeting, despite the minutes from the last meeting showing the Fed's committee becoming more hawkish. The minutes suggest the Fed is erring towards not only a more aggressive "restrictive" policy stance but also that rates may eventually have to rise more than previously thought. The next hike is expected at the December meeting.

Service sector surveys, from both IHS Markit and the ISM, will add further colour to the health of the US economy at the start of the fourth quarter. Flash PMI numbers have already shown the economy to be growing at a robust pace, rebounding from weather-related disruptions in September. Price pressures were also found to have been running close to survey record highs, adding to the hawkish tone.

The US services PMI numbers will accompany similar data for all major developed and emerging economies, which will be eyed in particular for deeper insight into how the global economy is faring amid escalating trade war tensions. The September surveys showed global economic growth slipping to a two-year low as an export-led slowdown spread to the service sector. Prices meanwhile rose at a record rate, led by the US, as tariffs pushed up costs. 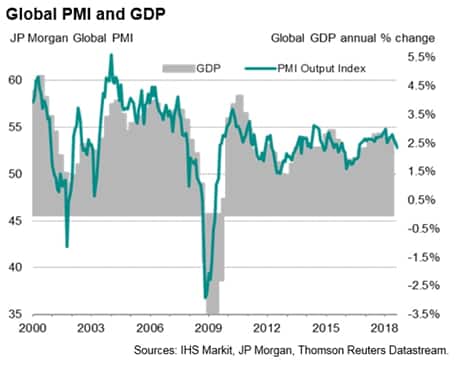 China's PMI data will come under particular scrutiny for the impact of trade wars on the economy, growth of which slowed to a post-global financial crisis low of 6.5% in the third quarter. Recent Caixin PMI surveys have added to the flow of disappointing data, indicating a stagnation in the manufacturing sector as exports remained under pressure from rising trade tensions, hinting that growth could slow further in the fourth quarter. The services PMI will also set the scene for official trade figures and inflation numbers out of China. 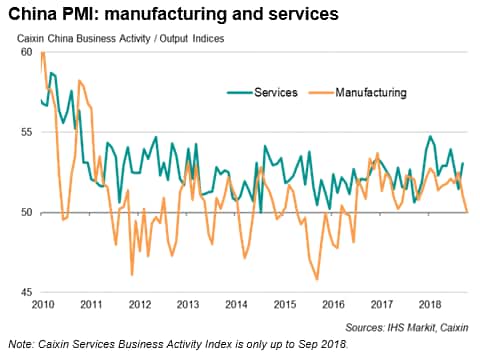 With the Bank of England setting out its stall for further rate hikes under an orderly Brexit deal, the incoming data flow could prove vital to the timing of policy changes but will also act as a check on the Bank's reading of the economy.

The initial estimate of third quarter growth is expected to show the economy having fared well over the summer months, expanding by as much as 0.6%, higher than the 0.3-0.4% indicated by the PMI surveys but likely due to temporary factors. The October services PMI numbers will meanwhile provide important clues to fourth quarter growth and any impact of Brexit uncertainty. Manufacturing PMI numbers disappointed, with growth slipping to the lowest since the Brexit vote. 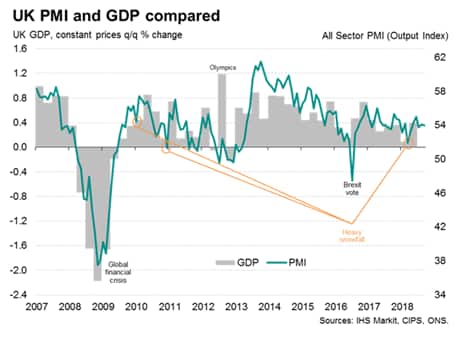 Central banks in Australia, New Zealand and Malaysia also meet to set interest rates. No changes to monetary policy are expected, but analysts will be eager to see how policymakers gauge current risks to the outlook.

The Bank of Japan left monetary policy unchanged in its late-October meeting, but the minutes will be scoured in particular for further details on the BOJ's view that downside risks to the economy had increased, and the scale of the appetite for further monetary easing should conditions deteriorate.