The worldwide release of October manufacturing PMI surveys will be a highlight in the coming week, providing early signals of economic growth and inflation at the start of the fourth quarter.

The Bank of England and Bank of Japan meanwhile both hold monetary policy meetings, while PCE price data and the monthly employment report will provide additional guidance on the US economy and Fed policy. Third quarter GDP numbers are also released for the eurozone.

Worldwide manufacturing PMI data will provide important signals of economic performance at the start of the final quarter of 2018. The PMI survey's gauge of export orders will give an updated view on global trade conditions. Prior PMI data showed world export sales falling for the first time in over two years during September amid growing trade tensions. 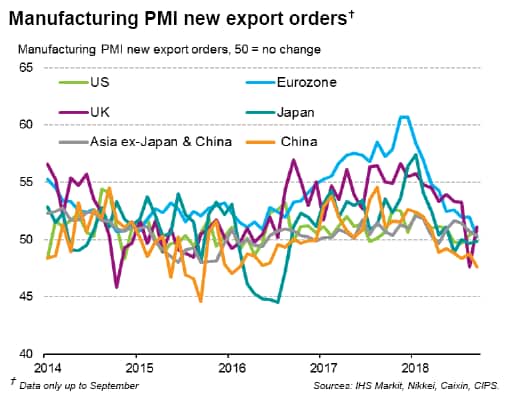 With flash PMI data for the US, Eurozone and Japan already released, the PMI surveys for the UK and China will come under particular scrutiny, especially as the former sees the Bank of England meet to set monetary policy. The MPC is expected to hold off with any rate hikes in coming months despite recent PMI data showing robust economic growth, being reluctant to tighten policy amid widespread Brexit uncertainty.

For China, the surveys will be scoured for the impact of growing trade tensions. The September Caixin PMI surveys rounded off the worst quarter seen so far this year, followed by news of the pace of economic growth slowing to 6.5%. The manufacturing PMI had shown China's exports coming under pressure from recent trade tensions.

The PMI price indices will also be eagerly watched for signs that tariffs are driving up costs and could feed through to higher consumer prices. The PMI surveys showed a record rate of increase in global selling prices in September, with especially strong price pressures in the US, as companies sought to pass higher costs on to customers.

In addition to the PMI and ISM surveys, the US calendar includes the monthly employment report, and non-farm payroll numbers in particular will be eyed for further confirmation that the Fed will have a green light to go ahead with a widely expected rate hike in December. Survey data suggest that non-farm payrolls should rebound solidly from September (see chart), when storms likely subdued jobs growth. 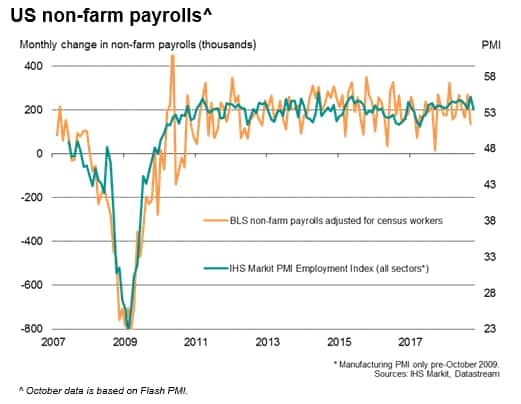 The Fed's preferred measure of inflation, the PCE price gauge, will also be updated, as will official trade numbers. IHS Markit's PMI data have pointed to upside risks to US inflation numbers.

In Europe, the final manufacturing PMI data will add insights into national trends. Italy's data will be under the spotlight amid rising political tensions and financial market jitters.

Third quarter GDP estimates are also published for the Eurozone, including national releases for France, Italy and Spain. The official data are expected to show robust 0.4-5% growth for the region as a whole, though the flash PMI data are already hinting that the pace could cool to 0.3% in the fourth quarter.

The Bank of Japan (BOJ) is meanwhile also widely anticipated to keep monetary policy unchanged next week, with the focus expected to be on its updated growth and price projections. Most analysts (including IHS Markit) expect the BOJ to maintain its ultra-accommodative monetary policy until 2020 in the face of stubbornly subdued inflation. The introduction of forward guidance for rates in July injected greater policy flexibility and is aimed at maintaining the current monetary policy stance for an extended period. Although there are concerns about the negative impact of prolonged monetary easing on the banking system, the latest semi-annual BOJ financial system report suggests the central bank is confident the financial system can cope with negative interest rates for the time being.