With global financial markets on edge over the pace of US interest rate hikes and the impact of trade wars, flash PMI data for the US, Eurozone and Japan will be scoured for signals of economic performance at the start of the final quarter of 2018. US GDP numbers will also be closely eyed for confirmation that the US economy continued to fare well in the summer months. The ECB and Turkey central bank are meanwhile meeting to set monetary policy.

US Flash PMI and GDP

Prior US PMI data showed the pace of expansion slowing to an eight-month low in September, dampened in part by extreme weather but also by intensifying capacity constraints. Output price growth hit the highest in the survey's history as tariffs exacerbated rising underlying inflationary pressures.

The flash PMI numbers will be followed by the advance estimate of US third quarter GDP, which is widely expected to show solid growth, albeit slightly less than the 4.2% annualised rate of increase seen in the second quarter. Our US PMI surveys point to annualised growth approaching 3% while the IHS Markit GDP tracker from Macroeconomic Advisers indicates a 3.5% rate. US durable goods orders and trade data will also be updated. 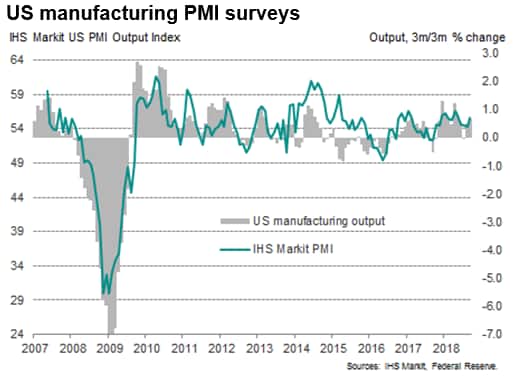 The publication of eurozone flash PMI data will meanwhile provide timely insights into price and growth trends within the single currency area on the day prior to the European Central Bank's monetary policy meeting. Recent comments from ECB chief Mario Draghi have added to market expectations that the central bank will halt its asset purchases at the end of the year amid growing confidence that an improving labour market will help raise inflation. However, the timing of any rate hikes remains more uncertain. The Eurozone PMI showed the pace of business activity growth near a two-year low in September, with price pressures also moderating. 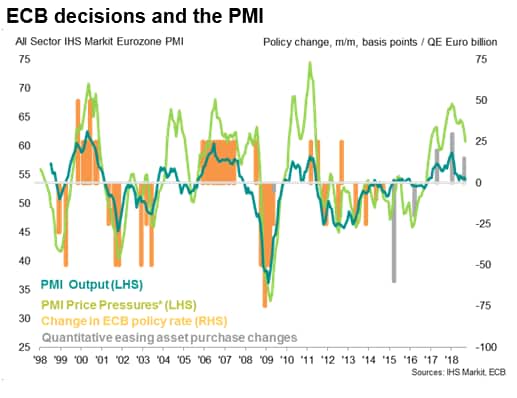 The weaker PMI numbers mean a rate rise looks unlikely within the coming year, as per current ECB guidance, and could be pushed further out if downside risks materialise.

Trade jitters had also subdued the Nikkei PMI for Japan, keeping exports close to stagnation, but adverse weather had also appeared to play a role in the slowdown. October's flash manufacturing PMI will therefore be scoured for greater clarity into underlying growth trends. 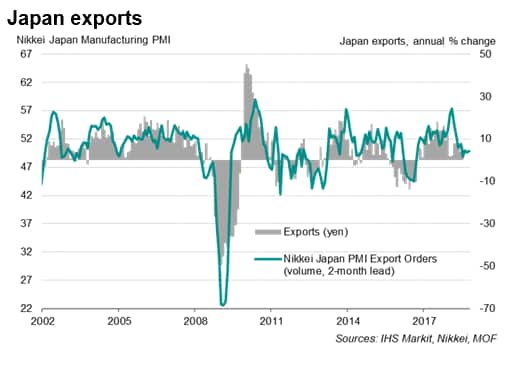 Three key central bank meetings will take place in countries facing currency worries. Turkey's central bank meeting comes in the context of prior concerns over central bank independence. However, the benchmark interest rate was hiked to 24% last month, helping to reassure markets and stemming a slide in the currency, which had plunged 40% against the US dollar this year.

Meanwhile, with recent comments about capital controls being part of monetary policymaking tools from several ASEAN central bankers, there will be great interest in Indonesia when policymakers meet. The rupiah remains under considerable downward pressure, having fallen nearly 12% against the US dollar so far this year. In response, Bank Indonesia hiked its policy rate in five out of the last six meetings. Since then, the September PMI survey signalled greater inflation pressures in Indonesia, with the input price index hitting a three-year high, driven mostly by a weaker exchange rate.

Markets are also speculating as to what measures the Russian central bank will take to curb rouble volatility, such as hiking rates, buying treasury bonds or intervening directly in the FX markets.

Next week also sees the release of advance estimates of third quarter GDP in South Korea and Taiwanese export orders, the latter being a key barometer for regional trade performance.

A quite UK data week will no doubt continue to be dominated by Brexit news, but also includes the October Household Finance Index from IHS Markit, which will be the first indicator of consumer and household trends at the start of the fourth quarter.