Analysis from Jane's Terrorism and Insurgency Centre (JTIC) highlights the call by Individualidades Tendiendo a lo Salvaje (Individuals Tending Towards Savagery; ITS) for further action outside of its traditional South American base.

According to JTIC, ITS, whose key ideology focusses around misanthropy, nihilism and a dislike of humankind, presents a more indiscriminate threat than that posed by existing eco-extremist and anarchist groups in Europe and South America. A recent statement by ITS represented a more global focus than previous releases, suggesting attempts to appeal to a more worldwide audience.

"ITS differs significantly from the wider eco-extremist and anarchist scene in that it attacks indiscriminately with no attempt to avoid casualties," said Christopher Hawkins, senior analyst at JTIC. "An example of this has been randomly placed improvised explosive devices (IED) that were detonated, or aimed to be detonated, with no warning given. ITS has also been involved in a long-running rhetorical conflict with the broader anarchist milieu internationally, accusing anarchist groups of not taking sufficiently extreme actions."

Latin America, Europe… and beyond?

Since its 2011 formation, the group has expanded beyond its country of origin (Mexico) and other countries in Latin America to claim attacks - ranging from low-level arson and IED attacks to assassinations - in Greece, Spain and a single attack the UK in 2018.

"Although these attacks were unlikely to have been directed by any central ITS command structure, they illustrated that through multi-lingual propaganda releases encouraging attacks internationally, the ITS name may be used by individuals or small groups inspired by the group's misanthropic outlook," said Hawkins. 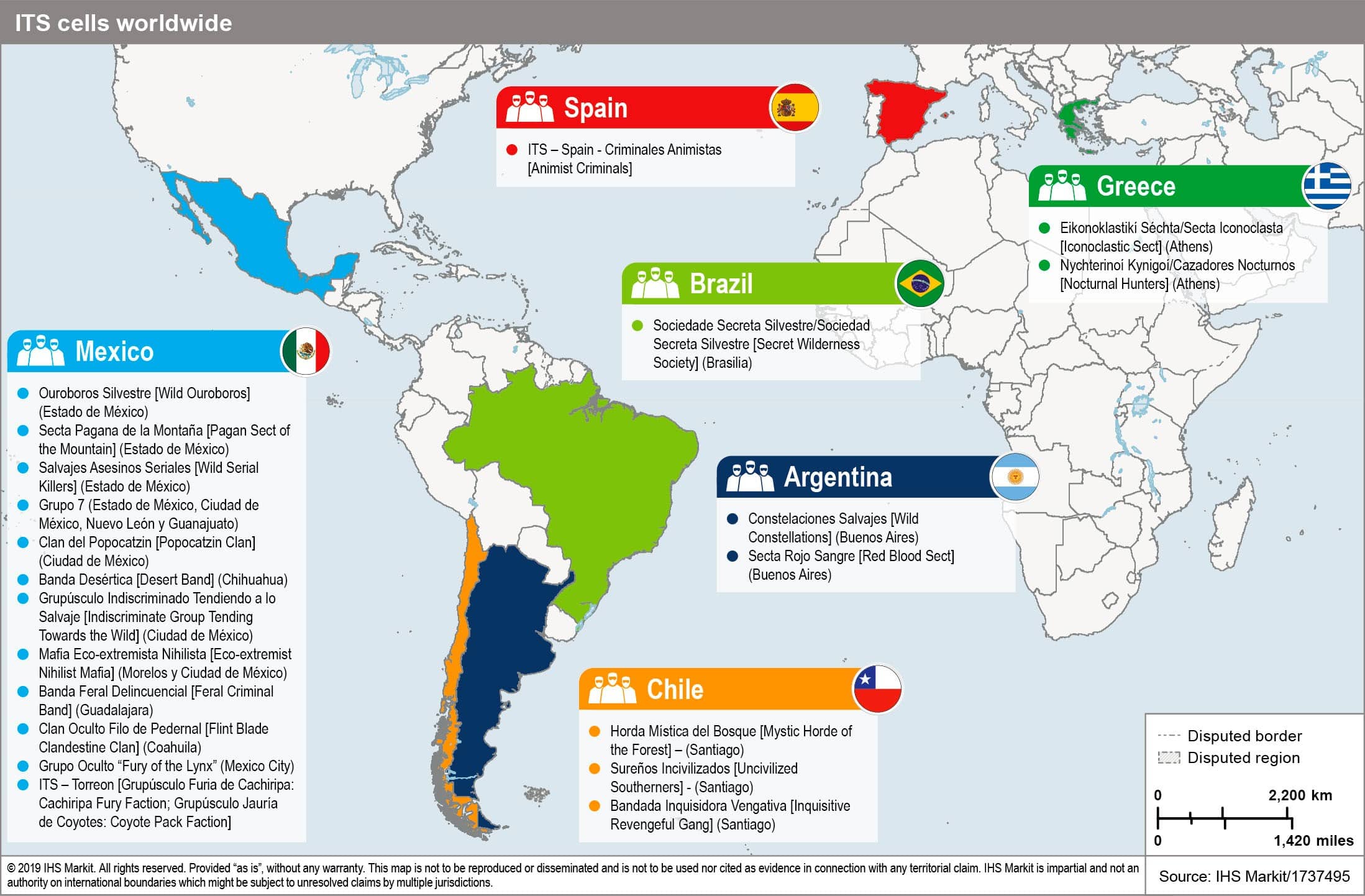 ITS has claimed that between 2016 and 2019 no members of the group had been arrested and JTIC has not recorded any arrests of alleged ITS members.

"This demonstrates that the operational security measures taken by ITS, including its self-contained structure, have proven to be effective to date, alongside the limited resources security services are able to dedicate to combatting ITS and similar groups in the face of other threats," said Hawkins.

Jane's Terrorism and Insurgency Centre (JTIC), an IHS Markit product, uses open source data to build a global database of attacks by non-state armed groups in addition to counter-terrorism operations and key statements by state and non-state actors. The database enables users to search by location, target, group (active and dormant), tactics and casualty numbers in order to quickly obtain actionable intelligence and/or data. The database includes over 350,000 events since 2009 and tracks over 1,000 separate non-state armed groups worldwide.

JTIC insight and analysis serves a wide range of clients, including a broad spectrum of the national security sector and an extensive list of corporate clients, providing timely, relevant, and trusted information. This is delivered in multiple formats to align with user workflows, encompassing data, reports, news and daily insights, as well as in-depth intelligence briefings. Find out more