Can the Eastern Mediterranean fully harness its deepwater gas potential?

The outlook for upstream growth in the region is promising, with the creation of the East Mediterranean Gas Forum (EMGF) by host states, the recovery in global gas markets, the transition within the region's energy sector toward cleaner power sources and the continued success of deepwater exploration efforts which have been set back by COVID-19 pressures, but which are expected to re-emerge in earnest in from 2022.

Regional gas balances are shifting
Egypt's gas balance is on a knife's edge though, as the long-term production outlook for the Mature phase Nile Delta Basin assets is one of decline. Power demand in Egypt has increased significantly over the past decade thanks to a growing population, urbanisation and an expanding economy; and despite major advances in renewable energy with over 16 GW of projects in the pipeline, natural gas is projected to remain the dominant fuel for power generation until at least 2040.

Large gas discoveries within the Emerging phase Levantine Basin and Eratosthenes Carbonate Platform have proven to be pivotal for the region, and Israel, which was once dependent on Egypt for gas, now has gas surpluses to offer to both Egypt and Jordan. While 2021 has seen a significant market recovery for LNG exports, with increased spot prices allowing Egypt to restart its second LNG export facility at SEGAS in February 2021 and re-establish material volumes of exports during the year, reliability of production is becoming an issue and Egypt's LNG plants could once again risk potential shutdown, unless short-cycle supply and new resource additions are secured, whether from Egypt or from the wider region.

Major upstream investors see region's potential
Despite steeper fiscal terms than neighboring littoral states, Egypt has retained interest from majors such as Eni, BP and Shell and attracted new exploration interest from majors such as Chevron, TotalEnergies, and ExxonMobil, all of whom are keen to explore the pre-salt clastic and carbonate plays of the Eastern Mediterranean offshore basins. Many of the leading players have been reassured by regional political collaboration to the extent of taking cross-regional positions with a focus on exploration.

Regional dynamics could shift again on further discoveries
Six high impact wells are planned in neighbouring basins within Cypriot, Israeli and Lebanese waters within the next two years. Competing forces such as conflicting national policies, boundary disputes, differing corporate interests and an evolving landscape of gas demand all have the potential to influence development strategies and timelines. Even so, a significant new gas find could be a game changer as littoral states explore mutually beneficial commercialisation routes for Eastern Mediterranean offshore gas resources beyond the current focus on regional demand and Egyptian export facilities. 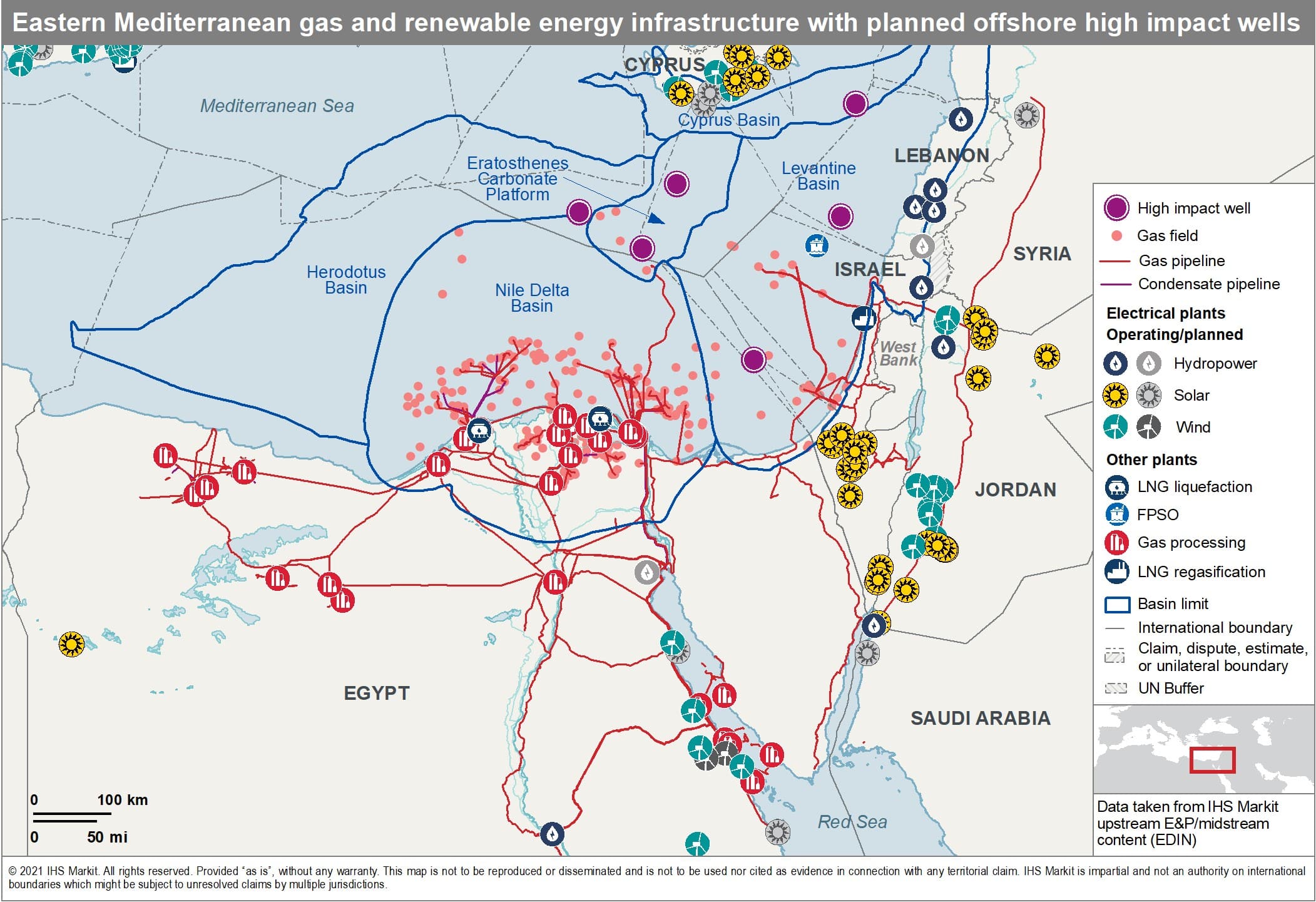 For more on the region's offshore gas opportunities and challenges, sign up to IHS Markit's 2021 Explore: Energy event, which will be hosting a deep dive into the Eastern Mediterranean offshore basins on 16th November.