The Dutch manufacturing sector began the final quarter of the year on a weak footing, with the health of the sector improving only fractionally, according to the latest PMI® data from Nevi and IHS Markit. Adjusted for seasonal influences, the headline PMI - a single figure indicator of manufacturing performance - fell to 50.3 in October, down from 51.6 in September, to signal the slowest improvement in operating conditions since the current period of improvement began in June 2013. 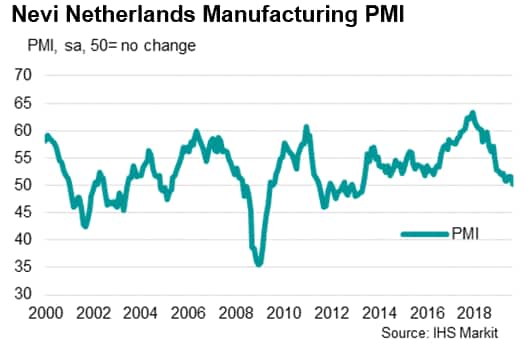 The subdued performance of the manufacturing sector in October reflected the first fall in production since April 2013, alongside easing factory workforce growth and a slower rise in new orders.

Subdued client demand was reflected in softer growth of incoming new business, which rose at the slowest pace since April. Domestic demand conditions, however, contrasted with that abroad, as new export orders increased in a reversal of September's downward trend.

The survey data hint that worse may still be to come in terms of official data releases. Official industrial production data are currently only updated to August, for which a contraction of 0.8% on an annual basis was recorded. However, the more recent PMI data for September and October points to further falls of a potentially greater magnitude. 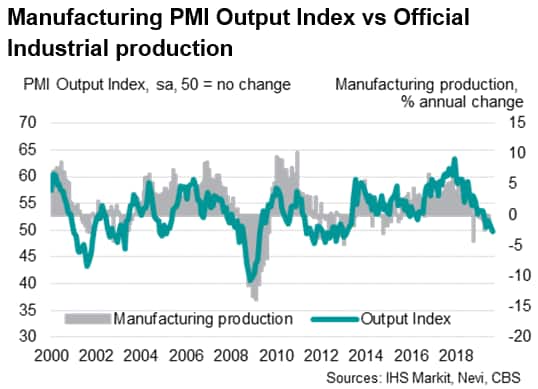 The October PMI data also highlighted the first fall in input prices for over three years, as softer demand reportedly drove down many raw material prices. Meanwhile, average prices charged by manufacturers continued to rise, although the rate of price inflation was the weakest since charges began rising over three years ago.

Alongside the weakening of current conditions, manufacturers also downgraded their output expectations for the next 12 months in October. Sentiment was among the lowest seen since the series began in June 2012. Respondents frequently cited declining production, easing new order growth and political woes as having dampened optimism about the year ahead. The political situation in the Netherlands has become increasingly uncertain after the coalition government lost its majority in mid-October. The increased probability of an election, changing political climate domestically and further global uncertainty is likely to continue clouding firms' outlooks in the coming months until resolved. 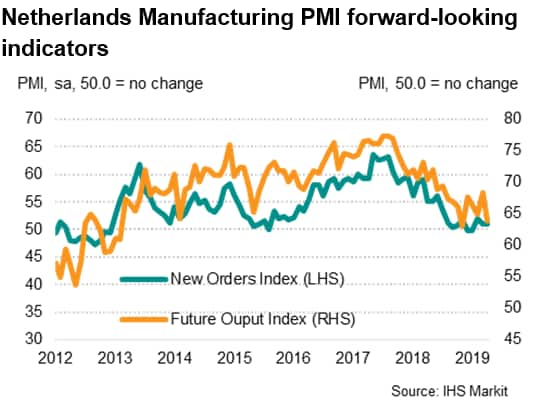 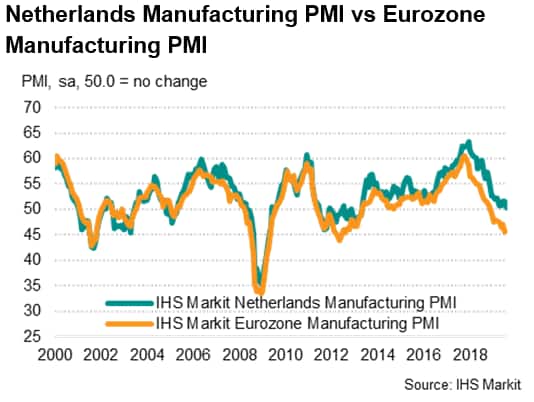 With Dutch operating conditions remaining firmly subdued, avoiding the eurozone manufacturing downturn is becoming increasingly unlikely. The current trend suggests that, unless the deterioration in the eurozone eases, the Netherlands may experience a similar contraction. October manufacturing data for the eurozone is released on Monday 4th November.

The next release of the Nevi Netherlands Manufacturing PMI will be Monday 2nd December 2019.