Strong heatwave and drought swept across the southwestern regions in China in July and August. In Sichuan, the most affected province and the home of China's largest hydropower fleet, peak load reached historical high and soared by over 25% in August, compared with the same period last year. Nearly 7 GW of industrial users in energy-intensive sectors were instructed to suspend production during 14-20 August, which was further extended by another few days, to ensure prioritized supply for residential power use.

Driven by repeated occurrences of high temperatures, cooling demand soared to 40-50% of total power consumption in peak hours, from a usual share of 20-25%, pushing the peak load in Sichuan to reach a six-decade high. Meanwhile, the region experienced multiyear low precipitation, dramatically depressing the output from the hydropower fleet.

Most of the power capacity in Sichuan was contributed by conventional hydro, accounting for nearly 80% of the power supply mix. Coal-fired power capacity, on the contrary, stayed quite small and only grew by less than 1.3 GW in the past decade, taking only 7% out of total additions, owing to the tight government policies to curb coal consumption. Consequently, Sichuan's dispatchable capacity inched by only 11%, while the local peak load continued to surge and rose by 43% in the past five years.

Additionally, Sichuan is a net power exporting province with one-third of the local generation exported in 2021. These interprovincial power transmission contracts are usually negotiated between provincial governments on an annual or multiyear basis and may not be able to be adjusted instantaneously.

How long will the power shortage last in Sichuan?

The power shortage will ease in September and October if the heatwave comes to an end. Peak load is expected to plunge by 23-33% in the autumn with less use of cooling appliances, which will dramatically alleviate the power supply tension. However, the risk is still high in the coming winter amid the second annual load spike, driven by strong power consumption for heating. 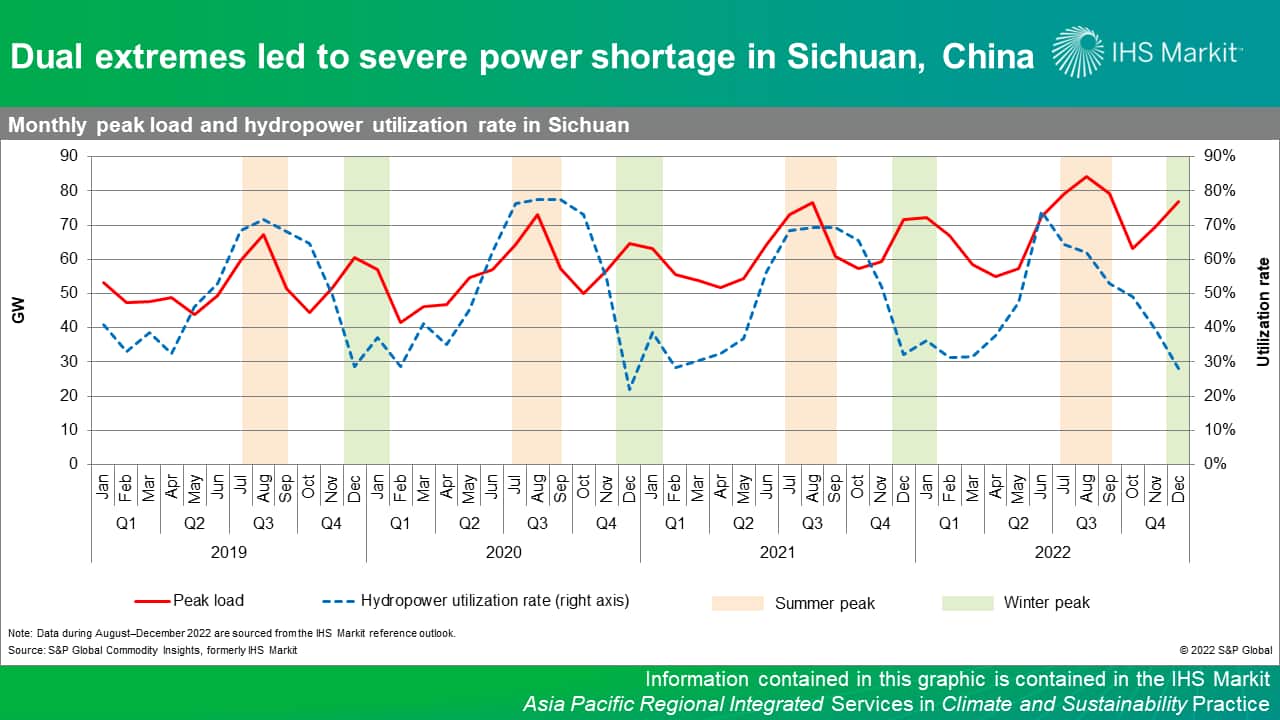 Furthermore, the distinct lack of rainfall during the wet season will have implications beyond the wet season. Major reservoirs in Sichuan typically start to impound excess water during the period from early September to October to store water for use in subsequent drier months. With this year's extremely dry wet season, these reservoirs will need a much longer period to achieve the desired water storage level to provide adequate generation. It remains uncertain whether Sichuan could cope with the winter peak load, when lower-than-average storage levels at the reservoirs may constrain hydropower output.

Gas-fired power, interprovincial power exchange, and demand response will be strengthened during the 14th FYP period (2021-25) to mitigate the risk of power shortage. A large gas-fired power pipeline up to 4.63 GW has been announced and projected to be online before 2025, a close to quadruple growth from current operating capacity. A longer-term pipeline in gigantic scale is also under development. This will dramatically increase the dispatchable capacity and power system's readiness to cope with seasonal demand fluctuation.

State Grid will increase the investment in Sichuan grid reinforcement and cross-regional connections as well, including the Sichuan-Chongqing Integrated Grids and another three UHV lines from northwestern grids. With these lines, Sichuan will be able to outsource power from neighboring regions in times of emergency and winter seasons.

Demand response may also help to mitigate the supply tension in summer peaks. The local government in Sichuan targets a demand response rate of 3% of total peak load by 2025, which will help to cut the summer peak load by an estimate of 2 GW. Moreover, time-of-use tariff scheme has been launched to attract commercial and industrial power users to engage in peak shaving, which may shift their power usage from peak to valley hours.

Learn more about our coverage of the Asia Pacific energy research through our Asia-Pacific Regional Integrated Service.

Bing Han is a senior research analyst of Gas, Power, and Climate Solutions team and primarily focuses on the China power and renewable market analysis.

Choon Kiat William Chia is a research analyst of Gas, Power, and Climate Solutions team and primarily focuses on the China power and renewable market analysis.