Brazilian corn chartering activities has been one of the main drivers for the current strong grain freight market. A record harvest, competitive pricing, and much-improved logistics in recent years have allowed Brazil to export 7.65 million tonnes of corn in August, the highest monthly amount ever, according to Brazil’s economic ministry.

Based on commodities trade flow intelligence, IHS Markit Commodities at Sea, Brazilian corn exports, mostly carried by Panamax and Supramax, are expected to decline in the coming months eventually after peaking in August, while US grain exports are expected to increase in the fourth quarter as the price spread against Brazil has narrowed from the last few months with harvest season starting in the US.

However, very slow US corn sales for the next marketing year are still a main concern for US farmers, caused by heightened competition and the impact of African swine fever.

Japan has been one of the top importers of US corn, although its appetite for US crop is currently at lower levels because of the availability of much cheaper Brazilian corn.

According to IHS Markit Global Trade Atlas, US corn exports to Japan has decreased since May 2019. On the other hand, Japan has become the top destination for Brazilian corn for July and August 2019. It explains the reason behind US President Donald Trump’s recent request for Japan to purchase more US corn.

In our view, there will be an increase in US corn exports to Japan and possibly to China as part of the trade deal, but any growth in feed use in China with US grain is expected to be limited by African swine fever.

China’s hog production has dropped significantly and other Asian countries, including South Korea and the Philippines, have also suffered from the pig disease. 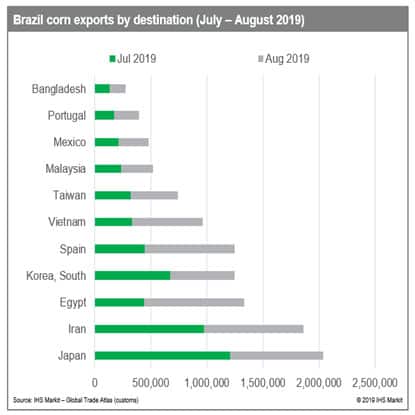