Drug patent expirations 2013: Past the worst of the patent cliff, or do biosimilars provide a new threat?

Depending on how you define the proverbial “patent cliff”, we are now roughly well into our third year of this unusually dense constellation of best-selling drugs whose patent protection period is running out. By some estimates, 2013 may actually represent a peak year in the patent cliff, but our assessment is that this occurred last year – and that whilst this year is by no means an easy ride for major drugmakers, the patent expirations are somewhat milder and less eye-catching.

Indeed, 2013 will come to a startling close with the patent expiration in December of Lilly’s best-selling anti-depressant Cymbalta (duloxetine), which rakes in around USD3.4 billion annually. And most of the other drugs which go off-patent before then are also small molecules such as Tricor (finofibrate), Xeloda (capecitabine), Zometa (zoledronic acid), Lidoderm (lidocaine), Temodar (temozolimide), Niaspan (niacin ER) and Aciphex (rabeprazole). 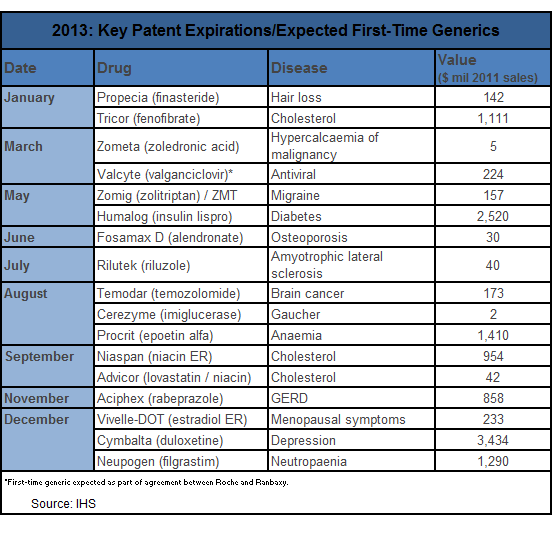 However, a key lingering uncertainty remains the patent status of several large, biotech molecules. Most notable here is the situation for Biogen Idec’s multiple sclerosis blockbuster Avonex (interferon beta-1a). The original patent expires here in end-2013 – but Biogen maintains that it has an extra 13 years extended protection, and the courts will decide this one in a decision that will also affect Merck KGaA’s sister drug Rebif (interferon beta-1a).

Lilly’s insulin inspro drug Humalog also expires in 2013, but the biosimilar insulin market remains in turmoil following the dissolution of the Biocon/Pfizer partnership, meaning that competition here is not likely to be particularly fierce. Similarly, the patent for Johnson & Johnson’s Procrit (epoetin alfa) expires in August, but there are no immediately obvious biosimilar competitors coming up against it – at least that are in the public domain. Finally, we expect to see activity in the biosimilar filgrastim market following the US approval for Teva’s version of Amgen’s Neupogen – and this will serve as the proverbial litmus test for the evolving biosimilars market in the United States.

For more on biosimilars

Last week, we launched our latest multi-client study, “Biosimilars and Non-Innovator Biologics in Emerging Markets – Payer, Regulatory and Pharma (PRP) Perspectives”. To participate in this study and shape its outline and interview guide, please contact us.