The Greek manufacturing sector has provided one of the few sparks of light in the general gloom of PMI figures across the global goods-producing sector since the start of 2019. The headline index continues to show strength and improvement in operating conditions across the Greek manufacturing sector despite widespread reports of export-led slowdowns across Europe in general. New orders grew sharply in April, alongside the fastest rise in output since October 2007. 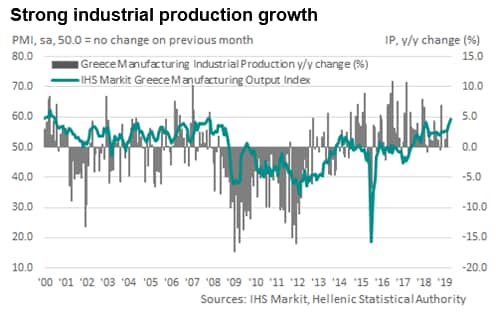 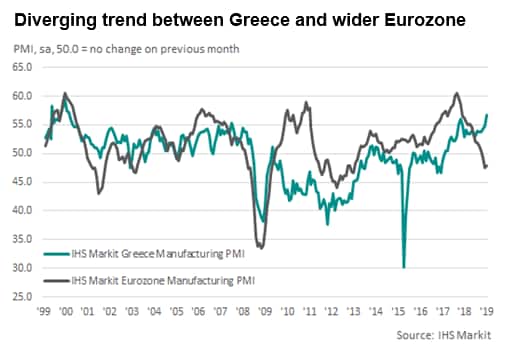 That said, the expansion does not necessarily signal a sector outperforming its neighbours, but more an economy emerging from numerous crises over the last decade which have dented growth considerably. As a whole, Greek GDP levels are currently 24% lower than those seen pre-crisis, and GDP grew in 2018 for only the second successive year since the 2008 crisis. There is clearly still a long way to go before the economy recovers, a route made all the more difficult by challenging external conditions. Such stumbling blocks have tempered expectations. IHS Markit forecasts GDP growth of 2.1% in 2019, easing to 1.6% in 2020.

The first quarter of the year signalled a rocky start to 2019, with global demand slowing and hitting many major economies, especially those in Europe. The effects of softer demand conditions for exports has been most apparent in manufacturing sectors. So far in the year-to-date, Greece has seemingly bucked this trend, with new export orders expanding at a strong rate in April, but headwinds are expected to grow stronger through 2019.

The malaise of the opening quarter is predicted to continue to impact global export growth and is forecast to be a downside risk to the Greek manufacturing upturn over the coming months. 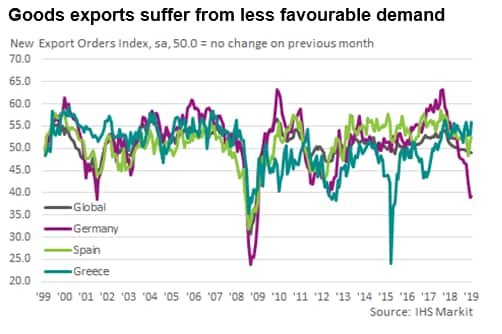 The gradual recovery of the Greek economy and its manufacturing sector is leading to calls for greater reform in financial and labour markets. Although delays to financial sector reform have been highlighted as a downside risk to significant growth in the Greek economy, labour market reforms are beginning to be implemented. The start of 2019 brought with it a hike in the minimum wage. During the crisis, the monthly minimum wage rate was reduced by 22% and January's decision to hike signalled the first such increase for almost a decade. Moreover, the new legislation also proposes periodic increases in the rate going forward.

An improvement in the minimum wage and relatively muted inflationary pressures should encourage consumers to spend. Not only will wage increases for the lowest paid provide an incentive for consumption, but also the re-emergence of the tourism sector should aide growth. Panellists contributing to the IHS Markit Greece Manufacturing PMI survey have frequently suggested that increases in tourism-related construction activity has supported the recent rise in new order book volumes. 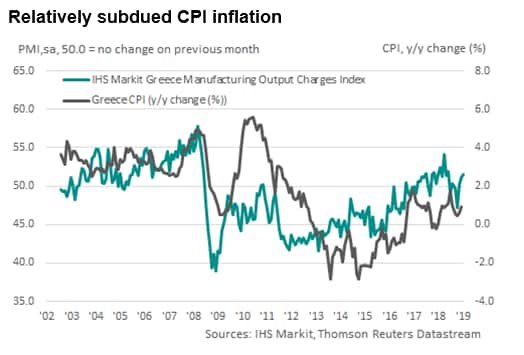 At the same time, a large proportion of the Greek manufacturing sector is composed of food and beverage goods producers. The IHS Markit Greece Food & Beverages Output Index has signalled a marked expansion in the year-to-date. Therefore, a recovery in tourism should have the knock-on effect of bolstering a significant section the manufacturing sector. 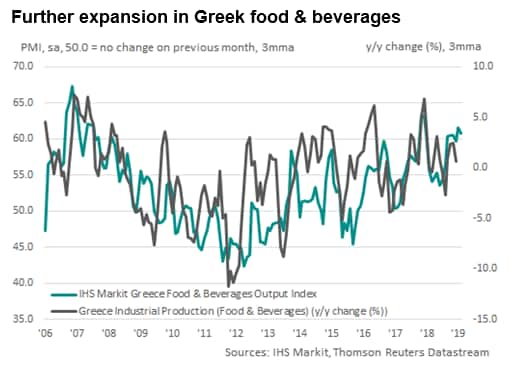 The coming 12 months may still throw up some testing times for the Greek manufacturing sector. An upcoming general election and a need for greater access to credit could hold back progress within the sector. That said, the Greek economy is currently rising from a low base and should continue to see an expansion into 2020, albeit slow and steady.