Caixin PMI data showed that Chinese economic growth gained momentum in June, adding to further signs that the economy is recovering from the impact of the coronavirus pandemic. Business sentiment and order book growth also improved solidly. The survey data also indicate how the recovery has been fuelled mainly by domestic demand amid a weakened global trade environment. With employment continuing to fall in June which, in turn, could dampened local consumption, further recovery may be limited, especially if external demand remains subdued.

The Caixin headline Composite PMI*for mainland China, compiled by IHS Markit and covering manufacturing and services, rose from 54.5 in May to 55.7 in June, indicating the fastest improvement in business conditions since November 2010.

While encouraging, the latest reading, when put into perspective by comparing with the record contraction suffered in February at the peak impact of Chinese lockdown measures, indicates only a partial recovery of lost output.

The ability of China's businesses to regain stronger growth was in part constrained by a lack of demand in the export sector amid a worldwide trade downturn. Total new orders rose at the fastest rate since the start of 2011 in June, but export business continued to fall.

In the absence of foreign demand, the easing of social distancing restrictions provided the most significant boost to the economy, benefitting domestic-facing sectors over export-oriented sectors. Services business activity consequently rose sharply in June, growing at a pace unsurpassed for just over a decade. In contrast, manufacturing output growth lost some momentum. 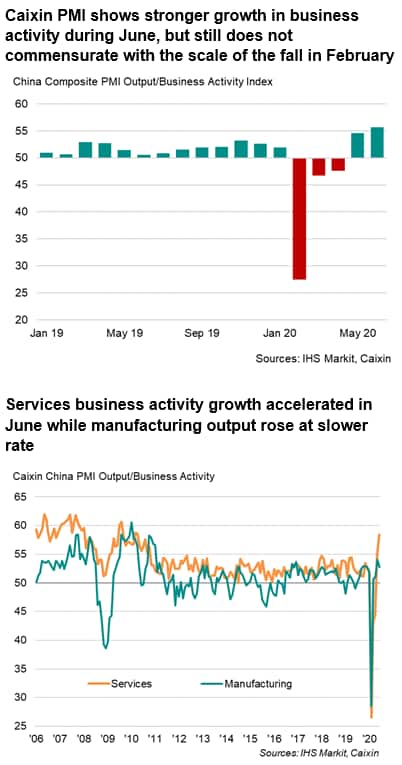 Chinese factories remained more reliant on domestic demand than foreign markets in June as the flow of global trade continued to underperform. Total new orders (including both domestic and export sales) for manufactured goods rose for the first time since January, though the rise was only modest due to a further fall in export orders.

In the service sector, overall sales growth accelerated to the fastest for nearly a decade, supported by a renewed growth in services exports. However, detailed data showed that the export gain was driven primarily by financial and insurance services, while foreign demand for both consumer and business services continued to contract.

The ongoing decline in overall employment raises a concern of the sustainability of further recovery. Chinese firms continued to reduce staff numbers during June, though not as severely as the record pace seen in February. Job losses were reported across both manufacturing and service sectors, with the sharpest job shedding recorded in firms providing consumer services as well as producers of textiles and chemical-related goods. Any further weakening of the labour market could dampen consumption trends which, in turn, will likely impede the recovery.

Business sentiment about the year ahead rose further in June, reaching the joint-highest for five years, as firms anticipate further improvement in the COVID-19 situation. But the recovery ahead is expected to be contingent on there being no serious second wave of infections or further shocks, or escalation of global trade weakness.

The increase in the level of backlogs of work in June was also subdued, underscoring how demand needs to strengthen further in the coming months to prevent the recovery from losing momentum. 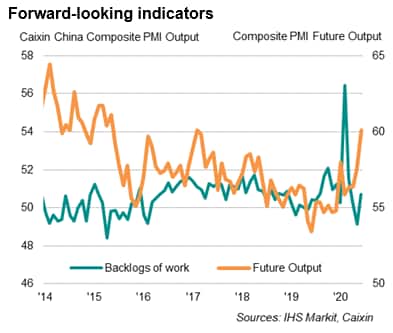