Dividends from oil majors back to growth

The recovery in the oil price, stronger free cash flow generation and improved balance sheet are expected to boost oil payouts by 7%

Dividend growth returned to positive territory in FY17 (+6%) after two years of decline in FY15 and FY16, and we expect that trend to continue. We are forecasting an increase of 7% in FY18, followed by growth of 4% in FY19 and FY20. Among the companies we analysed there are disparities; whilst we expect double-digit growth from Rosneft and Lukoil, we think that BP and Shell are likely to lag the sector by paying flat dividends this year. American and continental European oil majors are anticipated to post steady increases (c.5%).

The significant increase in the oil price since the beginning of the year, the reduction of capex in the past few years and the focus to generate enough free cash flow to sustain the leverage and the dividend has led to an improvement in the financial ratios. For the first time since 2014, the dividend is expected to be covered by free cash flow for all the companies analysed.

Analysis from the Energy division at IHS Markit is supportive of this positive outlook. Geopolitics have tightened market balances, leading us to raise our near-term price expectations. The US have re-imposed sanctions on Iran which are projected to reduce Iran's oil exports. We also lowered our outlook for Venezuelan crude production. Additionally, global inventories have been declining rapidly since early 2017. We expect this trend will continue through the third quarter of 2018, further adding to upward price pressure. Given the geopolitical developments roiling oil markets, we now predict the price of Dated Brent will average $77/barrel in 2018 and $75/barrel in 2019. 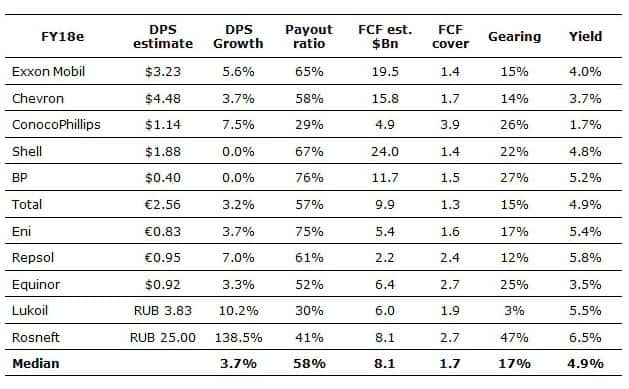 Join us at the FIA and @SIFMA Asset Management Derivatives Forum next week. Meet our experts to discuss how firms a… https://t.co/6UqYFbBwCK