Disruption in the repo markets

The US repo market took center stage last Tuesday, September 17 when a confluence of factors temporarily slowed down banks' cash spigots and drove overnight repo rates to as high as 10%, which led the NY Fed to inject large amounts of cash into banks, through their overnight repo facility, not seen since the days following September 11, 2001. Unlike the calamitous events that took place almost exactly 18 years ago to the day, last week's surge in repo rates was not purely driven by severe macroeconomic and liquidity concerns, but instead was more of an indication of banks' sudden unwillingness to lend enough cash to keep up with overnight repo financing demand due to concerns over lower than usual excess cash reserve levels. These decreases in reserves appear to be driven by a combination of the large amount of cash leaving banks' that day due to (1) corporations withdrawing large sums of money to pay quarterly taxes on the September 16 deadline date; (2) the settlement of a large Treasury bond auction; and (3) some dealers holding larger inventories of Treasury bonds after the prior week's sharp sell-off in the sector. The NY Fed acted on Tuesday to rapidly reign in sharply higher overnight rates closer to the Fed Funds target rate by injecting $75 billion of cash into banks through an overnight repo facility, which was last operational in 2008, that they then initiated each day for the remainder of the week and are likely to continue in some form through October. 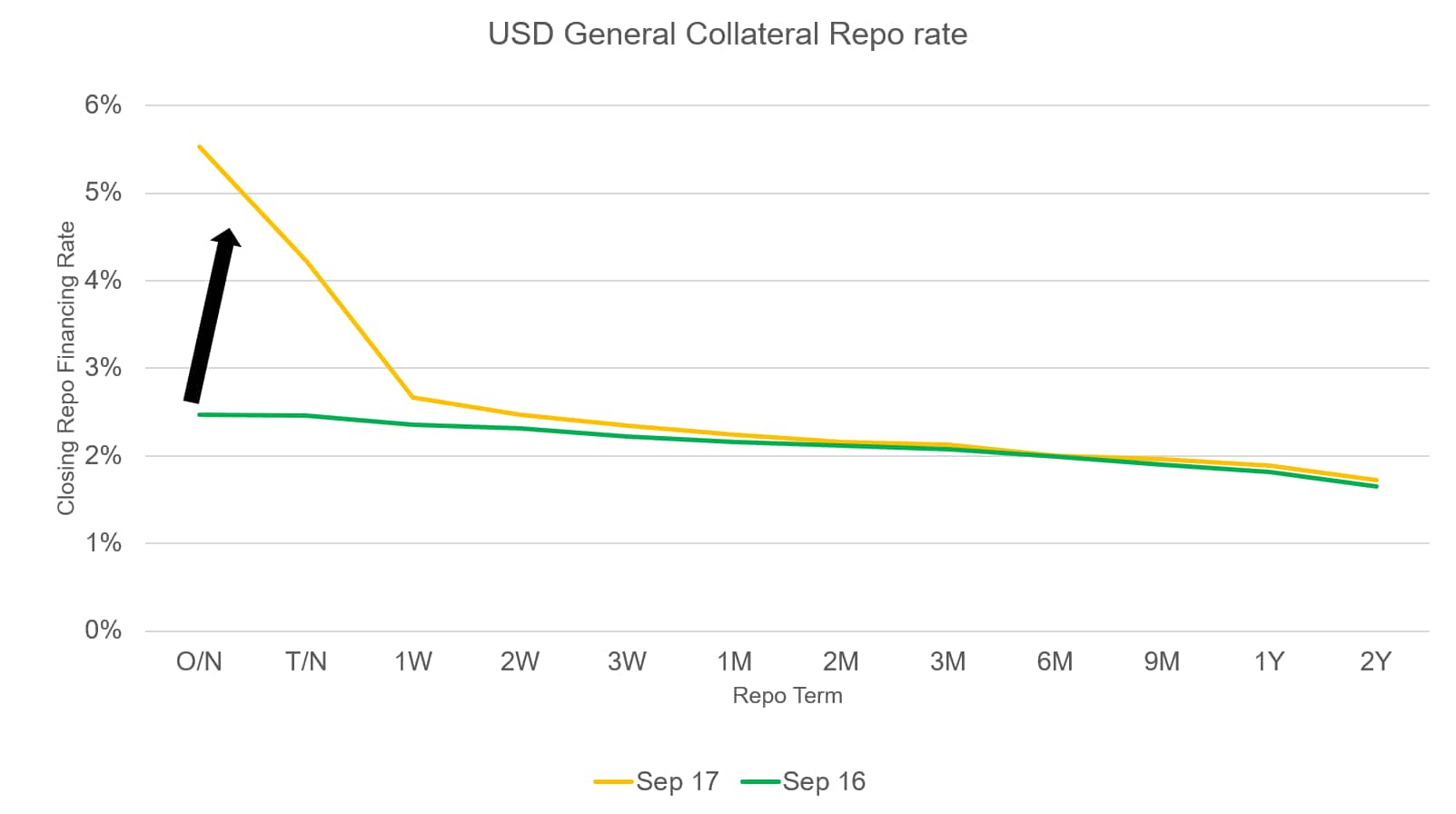 The disruption in the repo markets did not appear as concerning as in 2001 or 2008, as there was no apparent sign of a credit or market liquidity concerns like those two other periods, but it appeared to be more of an issue with the plumbing that facilitates the short term cash markets. The sudden decline in liquidity in the repo markets had a direct impact on the Secured Overnight Financing Rate (SOFR), which is the frontrunner to replace US dollar LIBOR, with SOFR closing +283bps from the prior day's close to 5.25% on September 17 and then down to 2.55% the next day as a direct result of the NY Fed's intervention. The chart above is repo financing rate data from IHS Markit that compares September 16 and 17 closing repo rates by term and shows the noticeable increase in the overnight repo rate and slight increases in rates up until two week terms, which may explain the NY Fed's most recent announcement for the opening up of multiple two week term repo facilities being offered on specific days over the next few weeks.

It seems that the prompt response from the NY Fed combined with a swift communication from the Alternative Reference Rates Committee (ARRC) managed to calm down the short term financing markets. At the end of the day, these very brief bouts of volatility in SOFR are likely a small price to pay in exchange for it being a much more data driven and unbiased short term rate versus LIBOR.

SOFR and alternative RFRs - An introduction