In researching the role and impact of six transformative technologies in key industries today, Digital Orbit utilized two focus groups. A collective of IHS Markit analysts formed one of the groups in question, while the other group consisted of respondents from Digital Orbit's Key Influencer Survey—an appraisal of leaders and major decision-makers at companies in industries where these technologies are being implemented.

While these two groups had similar thoughts in many aspects of transformative technologies, there were some disparities in their views. One metric in dispute was the readiness of these technologies to be widely adopted by industry.

Overall, the survey respondents judged the readiness of industry in adopting transformative technologies to be higher, with a cumulative score of 4.8. In comparison, the IHS Markit analyst collective gave the metric a much lower score of 3.9.

The disparity could be attributed to various factors, including the background of the respondents and their experience with technology. The Key Influencer respondents<span/> came from six big industries where the effects of transformative technologies were being monitored by Digital Orbit. Those six industries included automotive, manufacturing, healthcare, telecommunications, energy, and consumer.

After further study and analysis, however, it became increasingly possible that the disparity in readiness scores between Digital Orbit's two focus groups could be attributed to the workings of an external factor—one that had no direct contact with the surveys or research being undertaken in Digital Orbit, and yet possessed a significance and impact that could not be overlooked.

That external—and previously unaccountable—factor turned out to be the media, whose coverage of transformative technologies has been intense and unrelenting. In fact, an IHS Markit review of a select number of general-interest websites in 2018 found nearly 250,000 articles that either mentioned or discussed at length at least one of Digital Orbit's five transformative technologies—Video Everywhere had not yet been included in the study at that time.

That remarkable figure meant that on average, approximately 750 articles on transformative technologies had appeared in the media every day for the entire year in 2018.

Such intense scrutiny can cut both ways. While in-depth reporting is useful in raising public awareness of a subject or even fostering innovation in some cases, the hard glare of media can also produce a negative outcome, especially when coverage becomes skewed toward publicity or propaganda—the so-called "hype" machine at work. And without sufficient care taken during reporting, bias or the advocacy of a specific line of thinking could easily creep in, potentially giving rise to damaging misconceptions, unrealistic expectations, or outright false ideas.

All told, the vast amount of media attention on today's emerging technologies makes separating hype from reality difficult, even for those with considerable background and experience in the area. And a surfeit of media attention could understandably influence expectations on a specific technology and its timing or impact.

To be sure, the relationship between the amount of press attention and the readiness score obtained by a specific technology in Digital Orbit is far from conclusive. And yet a review of the discrepancies in 2018 between readiness scores given by IHS Markit analysts and those delivered by respondents of the Key Influencer Survey suggests there may be some correlation. 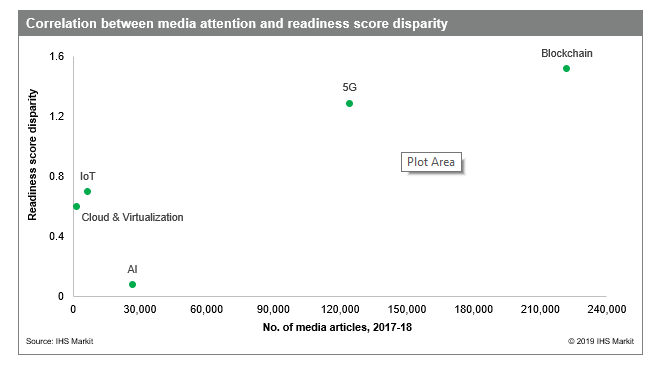 For instance, 5G and Blockchain, both of which racked up the largest number of media articles in 2018, also had the highest discrepancy in readiness scores between the analysts and the survey respondents, as shown by the graphic above. This is an area that Digital Orbit will examine further in future editions.