Difficult for Iraq to restrict crude oil exports to only 2.8 million b/d in June

Iraq is expected to export around 2.8 million b/d of crude oil in June, as the country is determined to commit to the OPEC+ production cuts deal, according to its oil minister Ihsan Ismaae. Crude oil exports of the OPEC's second biggest oil producer exceeded 3.6 million b/d in May, with production having remained above 4.2 million b/d last month, much higher than its OPEC+ quota. Most recent data for June by IHS Markit Commodities at Sea suggests that crude oil shipped in the first half of this month fell to levels close to 3.2 million b/d. Iraq had exported more than agreed to produce in May.

However, it's important to highlight that this doesn't seem to be an easy task for Iraq, with exports during the first week of June down to 2.9 million b/d, levels that couldn't be maintained for long, with exports returning back to 3.6 million b/d during the second week of June. This means shipments for the rest of the month will need to drop to 2.35 million b/d in the second half of June for Iraq to meet its target. This looks difficult to achieve. 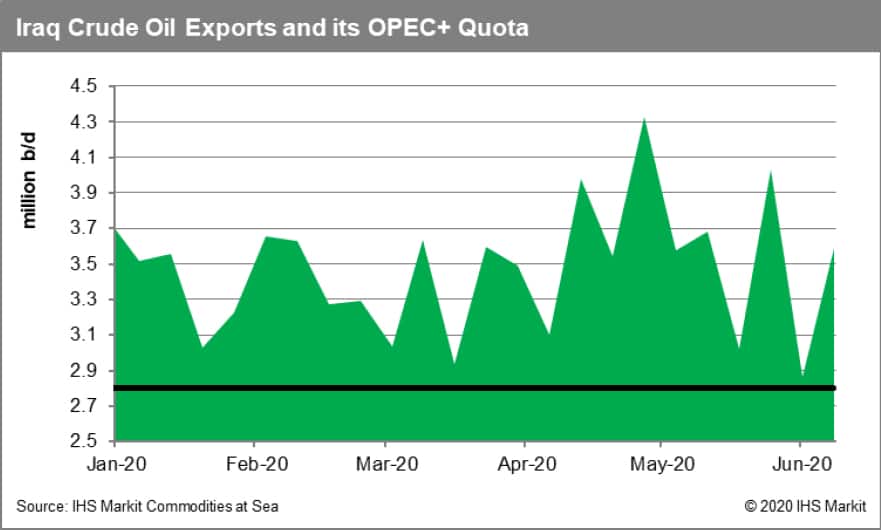 The country will try to reduce domestic crude oil consumption, switching to gas, which would allow it to export more. The energy minister's comments supported oil prices with Dubai crude futures moving higher on 16th June as Asian buyers digest the news of declining flows of barrels from Iraq in July.

Iraq's government has negotiated deeper production cuts with international oil companies that operate some of its largest oilfields. According to sources, BP has been asked to reduce output of the Rumaila field in the southern part of Iraq by another 10%. This is the country's largest oil field with crude oil production reaching 1.5 million b/d.

Baghdad also agreed with Lukoil to cut 50,000 b/d more from West Qurna-2, after May's agreement to reduce output at the southern field by 70,000 b/d. Total production should now not surpass 280,000 b/d. This will bring total cuts to similar levels agreed with Exxon, which operates West Qurna-1. The first agreement referred to 50,000 b/d in May with output to be reduced by an additional 70,000 b/d in June.

China and India continue absorbing most Iraqi barrels, with average shipments to China so far in 2020 standing at 1.2 million b/d, while around 960,000 b/d have been shipped to India during the same period. Volumes heading for China have been even higher since early April, with an average of 1.58 million b/d, while flows to India fell to 880,000 b/d. 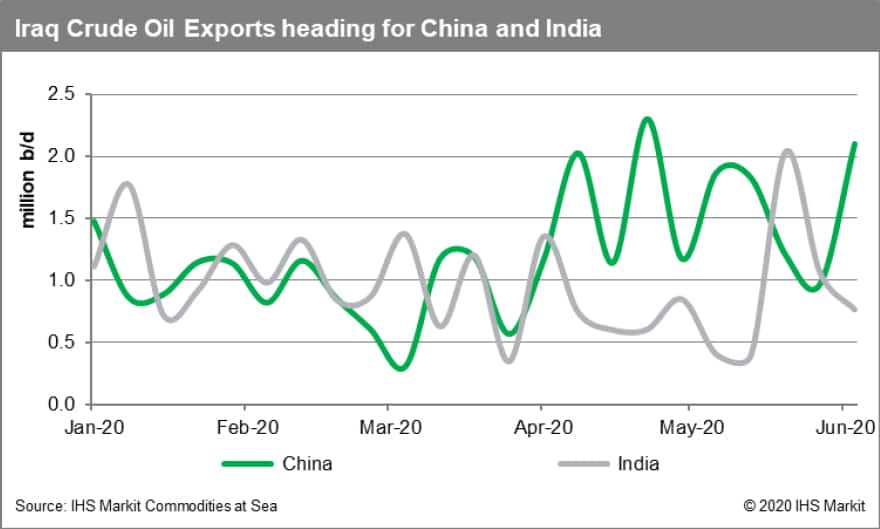