Did the US economy contract over the first half of 2022? It’s a tale of two measures

On July 28 the Bureau of Economic Analysis (BEA) reported that the nation's inflation-adjusted (or "real") Gross Domestic Product (GDP) fell at a 0.9% annual rate in the second quarter (Q2). This follows a decline of 1.6% in Q1, thereby satisfying the popular — although not the official — definition of a recession. But did the economy actually contract over the first half of the year?

GDP is spending on domestically produced final goods & services. A less familiar measure—Gross Domestic Income, or GDI—is payments to the domestic labor and capital that produced those goods & services. Since one person's spending is another's income, in principle the two measures are the same. However, because they are based on different data sources, GDP and GDI can—and sometimes do—differ by enough to give conflicting reads on the economy's direction. Such was the case in Q1 when real GDP declined but real GDI grew 1.8%. 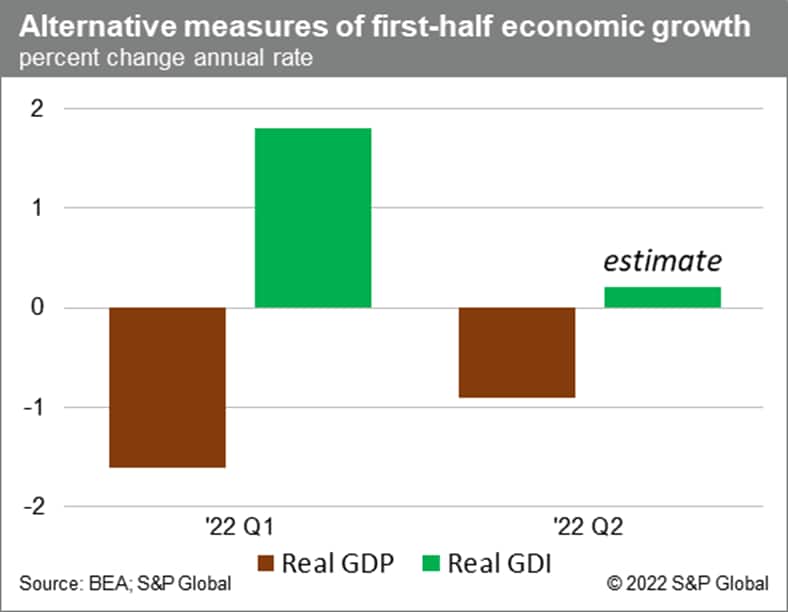 Which to believe? The BEA features GDP but GDI deserves respect, especially since scholarly research suggests that when initial estimates of the two measures differ notably, GDP tends subsequently to be revised towards GDI, not the other way around. Indeed, the BEA itself reports the average of GDP and GDI as an alternative measure of domestic production which, for Q1, grew 0.1%.

What about Q2? While GDP contracted during the quarter, a corresponding estimate of GDI won't be available from the BEA for another month. This delay arises because profits are compiled with a lag following the close of the Q2 reporting season. However, for the S&P 500, a "mixed" estimate—one that combines earnings of those companies that have already reported (representing 72% of the value of S&P companies) with analysts' estimates for those companies that haven't—suggests that S&P 500 operating earnings grew 31% in Q2 before seasonal adjustment.

Now, GDI includes the profits of all corporations—large and small, public and private, C-corps and S-corps—not just the 500 public, large-cap, C-corps covered by the S&P 500. Furthermore, the BEA adjusts reported earnings not only to remove seasonal variation, but also downwards to reflect the cost of replacing inventories and depreciated fixed assets at current rather than book prices. In today's inflationary environment, these latter adjustments are large. Nevertheless, our estimate is that corporate profits, as measured in the National Accounts, grew enough that GDI increased a modest 0.2% in Q2 following the stronger rise in Q1.

So, did the economy contract over the first half of 2022? It's a tale of two measures, and we'll have a better idea of the story's ending come the 25th of August when the BEA releases its estimate of second-quarter Gross Domestic Income.