In the past three years, the oil and gas industry has restructured to adapt to the low oil price environment, which turned from a "lower for longer" to a potential "new norm," albeit with increasing uncertainty owing to geopolitical factors in the past few months. Thus, operators had to adapt to reduce their capital costs and lower their operating costs. This led to many majors announcing further reductions in the breakeven prices.

In a recent study delivered to clients, we categorize project costs into two broad categories-cyclical and structural-based on their reliance on market conditions.

We define cyclical costs as the costs that are sensitive to market conditions, and thus can fluctuate rapidly. These costs include unit costs (e.g., equipment) and labor rates, and are incurred as both capex and opex. These costs have fallen materially since third quarter 2014 until late 2017 where we witnessed recovery in some of the sectors.

Structural costs, on the other hand, include cost changes that occur because of other factors, such as efficiency gains and design changes. Technological advances, including increased use of automation, digitalization, and widespread drone utilization, are implicitly included in both these factors and certainly influence their contribution.

While structural costs were often overlooked in favor of cyclical costs when oil price was high, these costs are now scrutinized in the new cost environment, and operators are paying more attention to control the costs and improve the breakeven prices. In these conditions, the industry continues to embrace practices and technologies to improve efficiency so as to lower costs as a sustainable way to undergo future developments.

Our analysis reviewed a portfolio of 77 projects in offshore and onshore conventional terrains, and concludes that developments costs have indeed come down significantly, with structural-cost reductions driving more than 40% of the typical improvements: 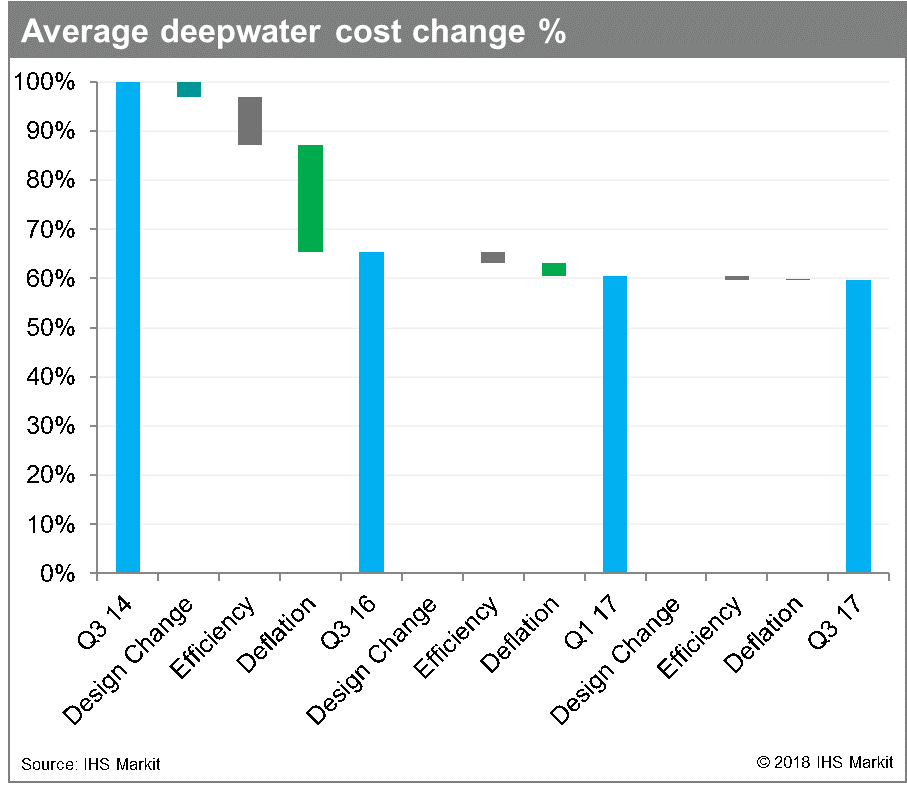 Inflationary pressures are creeping up, and the risks from the US-imposed tariffs on steel and aluminum will have longer-term effects on the markets, especially in North America. We expect offshore cost inflation in 2018, with expectations of a 2-3% annual increase as cyclical factors start to slowly unwind.

As service costs eventually do rise, we expect the deflation element of cost reductions will be countered by more widespread efficiencies, greater use of new designs and focus on technology including digitalization, where companies are realizing significant savings in the near-term through focused, incremental changes and optimization of assets.

It is clear also that "design changes" can become the new standard, where complete redesigns are implemented, albeit many undeclared.

Long term, however, the biggest gains will come from transformative and disruptive technology breakthroughs that have the potential to dramatically reduce the costs and thus increase the feasibly recoverable resource base and redraw the competition landscape. The next question will be how to drive changes forward and not to backslide.