With August seeing a rise in COVID-19 case numbers globally due to the spread of the Delta variant, it was no surprise to see healthcare lead the PMI growth rankings and hospitality slump. Similarly, growing pandemic related shortages have increasingly hit many manufacturing sectors, such as autos and construction materials, with spill-overs to some service sectors such as IT services. Price pressures are most concentrated in those sectors reporting the greatest constraints.

IHS Markit's global PMI data, based on information collected directly from over 28,000 companies around the world, showed the pace of global economic growth slipping in August to the lowest since January. The slowdown occurred alongside a further wave of COVID-19 infections as the more contagious Delta variant spread across increasing numbers of countries, notably in Asia but also in the US and parts of Europe. 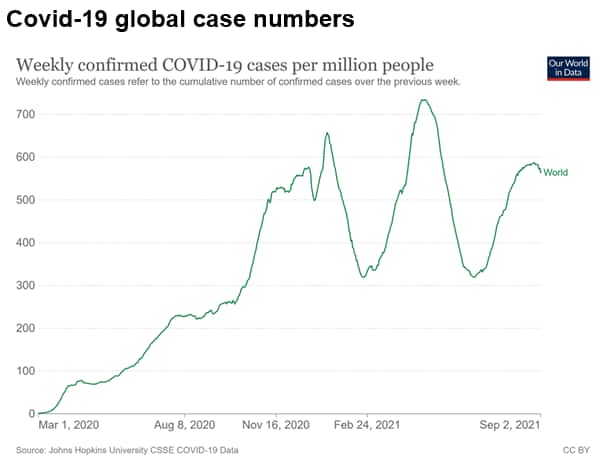 Output under pressure from COVID spread

Output consequently fell in China as well as a number of other smaller Asia-Pacific economies, and growth slowed in the US and Europe. Service sector output growth dropped worldwide to the lowest since February, led by the first fall in global services exports since March, and manufacturing grew at the lowest rate since the sector's recovery began in July of last year. 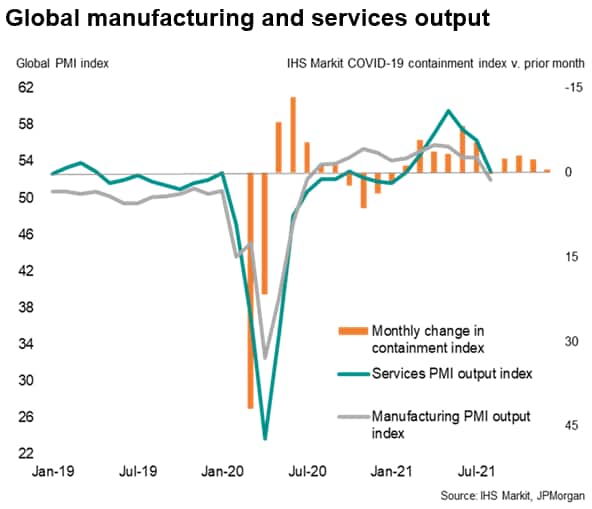 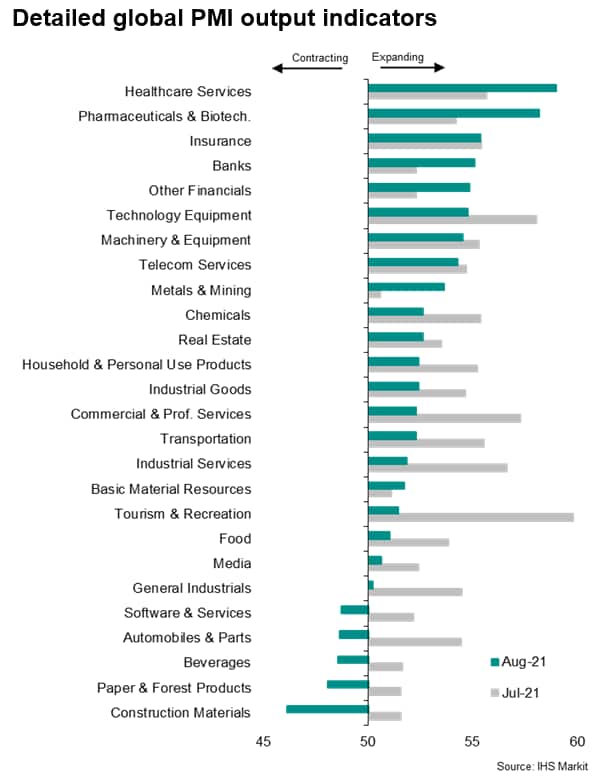 Looking deeper into the PMI data by detailed sector, the strongest expansion in August was recorded in healthcare services, reflecting the resurgence of the pandemic. Growth of business activity in this sector was among the highest ever recorded by the survey, albeit below prior peaks seen during the pandemic.

In contrast, growth deteriorated to the greatest extent in the tourism & recreation sector, as many economies reimposed COVID-19 restrictions and concerns over the spread of the virus dampened demand for travel and other hospitality activities. 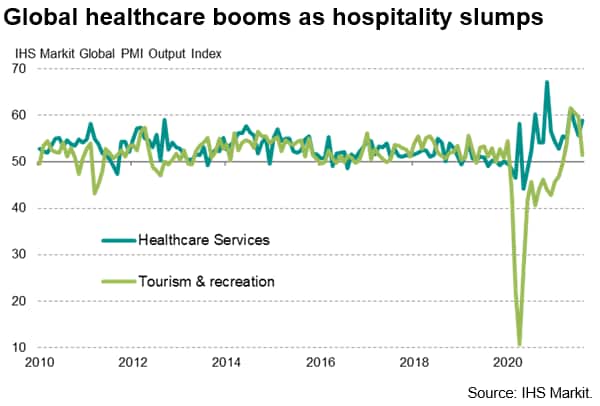 Steep slowdowns were also seen in many manufacturing sectors, most notably autos production and construction materials, linked in many cases to supply shortages curbing production capacity. 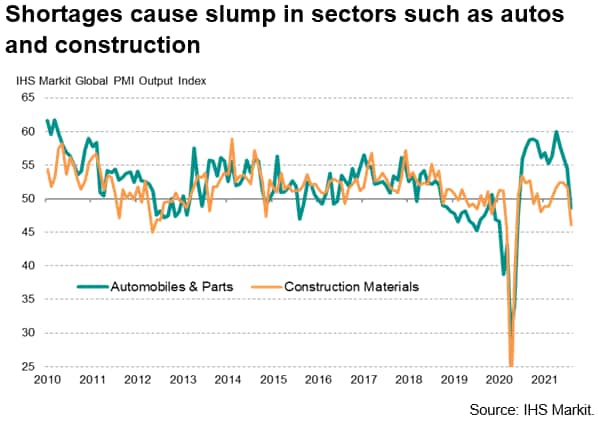 Of the 26 detailed sectors covered by the global PMI, falling output was in fact seen in five sectors, four of which were manufacturing oriented and a fifth - IT software and services - saw activity fall in part due to a lack of tech equipment.

The constraints on production caused by a lack of inputs were further highlighted by certain sectors seeing output lag new orders growth. Autos and construction materials manufacturing, for example, reported that output had fallen short of new orders to the greatest extent of the sectors covered, followed bv software & services and industrial goods manufacturing. 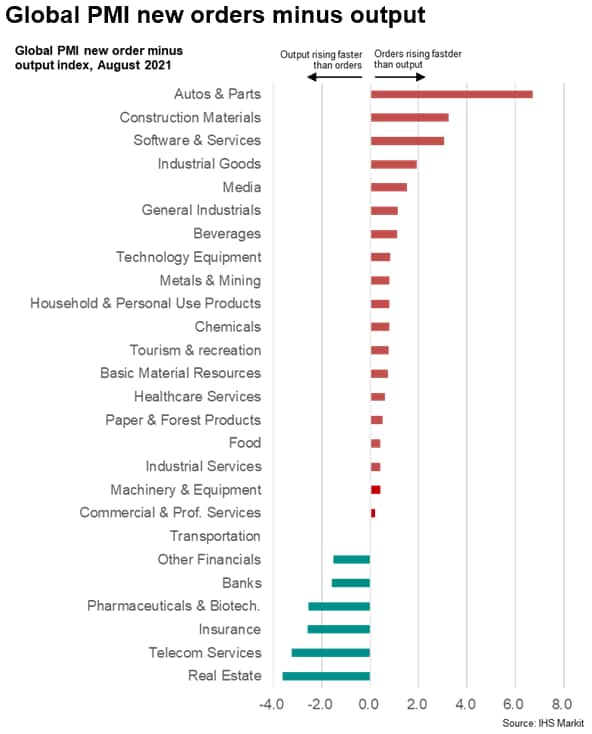 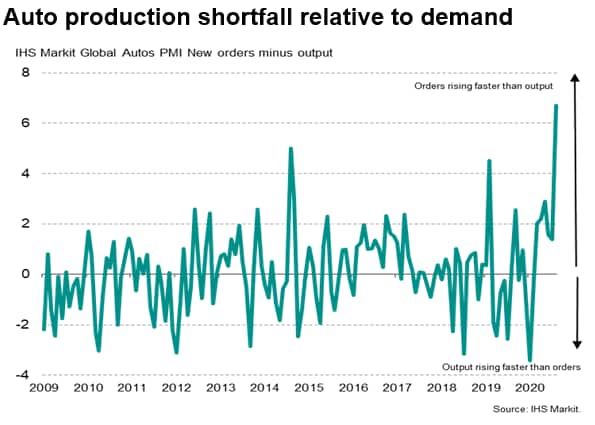 Price hikes were most prevalent in sectors reporting the greatest constraints and shortages relative to demand. The steepest rise in average selling prices globally in August was therefore recorded in the chemicals (including plastics) sector, followed closely by timber and paper producers. 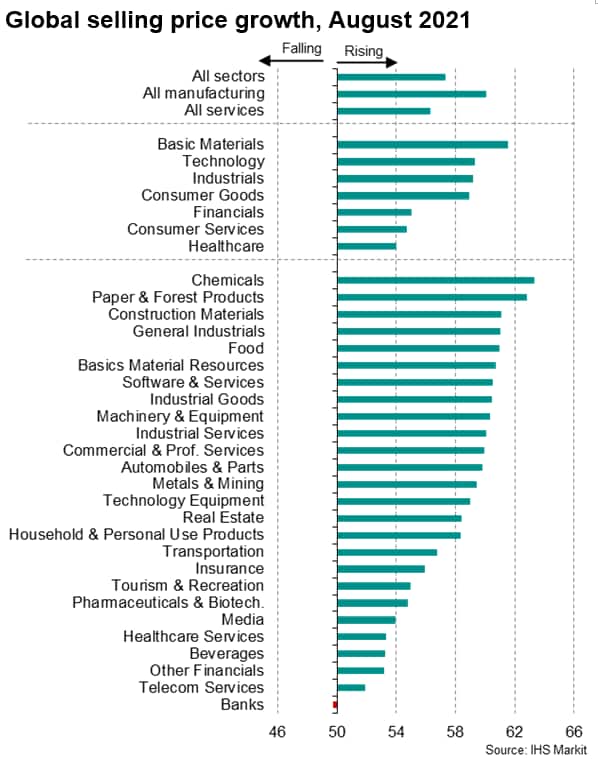 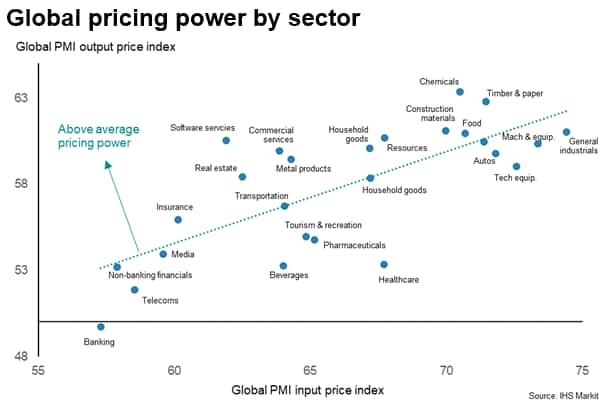