All signs point to the second-quarter real GDP plunge in the US and European economies being one for the records—with double-digit quarter-on-quarter (q/q) declines in the United States, eurozone, and United Kingdom. Anticipating that growth will return in the third quarter in the American and European economies, these downturns will still be the worst since the end of World War II. For 2020 as whole, real GDP is projected to fall 8.1% in the US, 8.7% in the eurozone, and 12.2% in the UK. Mainland China's record first-quarter nosedive has been followed by a second-quarter rebound, which will lead to annual growth of 0.5%. All this means that global real GDP is projected to decrease 6.0% in 2020, more than three times the 1.7% contraction in 2009 during the Global Financial Crisis. 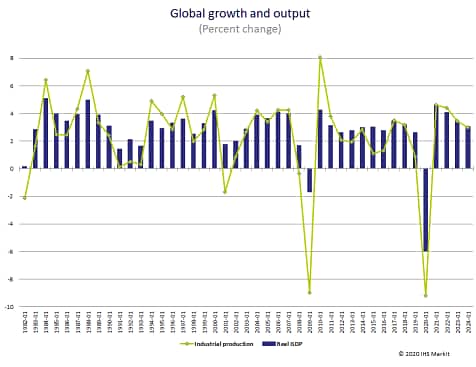 Ironically (and mercifully) the recessions triggered by the coronavirus disease 2019 (COVID-19) pandemic in the developed economies are likely to have been short. IHS Markit estimates that the recession lasted two months in the United States and eurozone (March and April) and three months in the United Kingdom (March, April, and May). For the US economy, this would be the shortest recession on record (back to the 1850s). The prior record for the shortest recession was the six-monthlong downturn in 1980.

The intensity and quickness of the downturn are confirmed by the IHS Markit Purchasing Managers Index™ (PMI™) reports for May. After unprecedented drops to record lows, PMI™ data for all the key economies have bounced back sharply. However, with the exception of China, the indexes are still below 50, the demarcation line between contraction and expansion. Thus, while the worst is over, the recovery is likely to be hard slog—even after an anticipated short-term bounce. The global index of manufacturing export orders remains deep in contraction territory, suggesting the external demand outlook of China and other Asian export powerhouses is highly challenging. IHS Markit predicts that global trade will contract at a doubledigit rate in 2020.

Even with the beginnings of a recovery in place, the fallout from this pandemic and the lockdowns can only be described as massive. With millions of businesses shuttered and tens of millions of workers unemployed, the economic and social costs continue to rise and will stay elevated for a long time. This will require continued and additional support from central banks and governments and continued vigilance by health authorities vis-à-vis new waves of the COVID-19 virus. Otherwise, this deep and brief downturn could turn into something far worse.

Any final EU-UK #trade arrangement is unlikely to replicate the frictionless trade that that currently exists betwe… https://t.co/Fx4hpDhXEu

Monthly #USGDP rose 0.7% in October following a 0.8% increase in September that was revised lower by 0.2 percentage… https://t.co/59O55qWt9t

US consumers have found a way to spend money amid the chaos and retail has been a key beneficiary of a widespread s… https://t.co/shSb3Qskpf