Czechia has been one of the strongest supporters of Chinese investment into the Central European region, seeking to diversify its foreign direct investment (FDI) sources away from Western Europe. Although a change in this strategy has been indicated by Prague City Council ending its co-operation agreement with Beijing and Czech President Miloš Zeman criticising the slower-than-promised investment flows from China, overall foreign relations are unlikely to be affected.

Recent moves by Czechia signal the country's disappointment with China's investment strategy. Of these, the clearest indicator was a January 2020 statement by President Miloš Zeman that he would not be attending the annual Central and Eastern Europe (CEE)17+1 summit of Chinese and Central and Eastern European heads of states in Beijing (China) in April 2020. Zeman had previously been a staunch supporter of deeper investment and bilateral ties between Czechia and China, but cited "China's broken promises" evidenced by "lack of investment" in Czechia as his main reason for missing the summit. His comments were followed by the decision of Czechia's capital, Prague, whose mayor Zdeněk Hřib (Pirate Party; Česká Pirátská Strana: CPS) suspended the "sister city" co-operation agreement with the city of Beijing in October 2019 over the latter's insistence to include a reference to a "One China" policy in the agreement. Instead, Hřib on 14 January 2020 signed a similar agreement on cultural, economic, and tourism co-operation with Taiwan's city of Taipei. This prompted the city of Shanghai to suspend its agreement with Prague.

Zeman's criticism and the breakdown of Prague-China links are unlikely to undermine the two countries' future bilateral ties, but Chinese investments are unlikely to accelerate. When Prague and Beijing signed their sister-city co-operation agreement in March 2016, Chinese President Xi Jinping promised about CZK230-billion (USD10-billion) investment in Czechia during his visit to Prague. Since then, FDI inflows from China have included focus on real estate in Prague, and acquisitions of a major Czech brewery, shares in a football club and stadium, and an online travel agency. However, there has been only limited investment into strategically important projects, such as the country's transport network. China had previously expressed interest in investing in Czech infrastructure (primarily the railway sector), its banking and financial sectors, and IT (particularly in the fields of 5G telecom technology and telecom operators). Investments into such projects are unlikely to expand significantly, primarily because of China's re-evaluation of its stance towards investments in the European Union overall, given the bloc's stricter scrutiny of foreign investment in strategically important sectors. The EU's investment screening regulation is due to become fully effective in October 2020. In addition, China's 2020 priority will be mainly focused on maintaining domestic economic growth and managing its trade relations with the United States. This also means that it is likely to focus on high-quality investment projects providing quick returns, or investments in strategic sectors such as financial services and high-tech manufacturing. Investments outside these categories, particularly those requiring state funds, are likely to be heavily restricted.

Czechia's inclusion in China's Belt and Road Initiative (BRI) is unlikely to be compromised. Since 2012, Czechia has been part of China's initiative to broaden its economic ties into CEE under the 'CEE17+1' group. The agreement encompasses, above all, a special credit facility focusing on infrastructure and technology projects, bilateral trade, integration of the banking sector, promotion of tourism, and investment in transport networks and construction. In 2015, China included the CEE17+1 in its BRI programme, which aims to connect Eurasian economies through trade, investment, and infrastructure projects. Recent developments are unlikely to indicate that Czechia will be excluded from this initiative. After Germany, China is Czechia's second-largest trading partner in terms of imports, accounting for approximately 15% of the total imports into Czechia in 2019. Czechia is also China's second-largest trading partner for imports in CEE (after Poland). As such, strategically, its relationship with Czechia is unlikely to be cut completely. 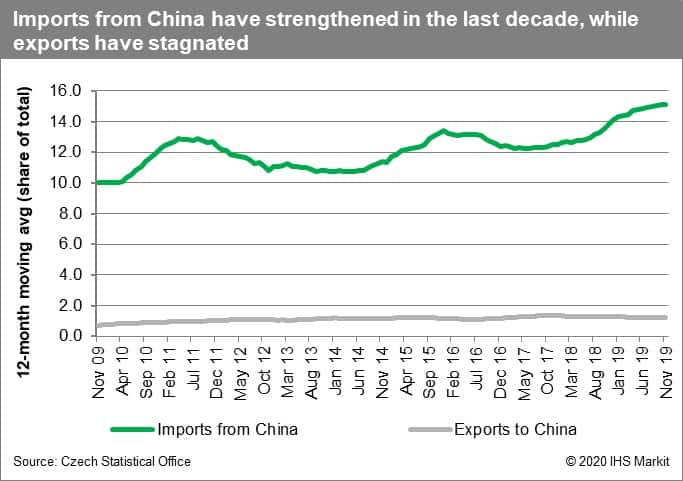 Hřib's initiative does not represent Czechia's foreign policy stance towards China and his party has a limited impact on policies at the national level. In 2018, Hřib's CPS entered the ruling coalition in the Prague City Council, with Hřib becoming Prague's mayor. The party has also won seats in other municipal assemblies. However, at the national level, its influence remains limited. The CPS controls 22 out of 200 seats in the Czech Chamber of Deputies (the lower house of parliament), and it is also in opposition and has little, if any, influence on Czech foreign policy. Any initiatives or immediate contractual issues resulting from Prague's new and cancelled sister agreements, therefore, are likely to remain at a local level. However, cancellations of existing projects with Chinese participation are highly unlikely. Czechia - at the national level - continues to support the 'One China' policy.