CVA Wrong Way Risk: What does the CDS data tell us?

The wrong way risk (WWR) modelling of valuation adjustments (xVAs) is known to be a challenging problem, if not intractable. This is due to the lack of relevant historical data and potential for misspecification in the joint modelling of discrete default event and continuous risk factor movement (Aziz et. al, 2014). In this article, we revisit WWR modelling by using information from the credit default swap (CDS) market. In particular, we analyze the market prices of Quanto CDS contracts, which are designed to provide credit protection against the default of a reference entity and are settled in a non-domestic currency. The contingent payoff of the Quanto CDS contract naturally reflects the market-implied interaction of FX risk and credit default event, and hence, sheds light on the level of WWR for FX-sensitive trades and portfolios.

Figure 1 shows the Japan sovereign CDS premium (5-year par spread) which represents the cost of buying credit protection for a Japan sovereign default. The USD spread and JPY spread correspond to the CDS contracts in which the settlement currencies are in USD and JPY, respectively. One can find an intriguing persistent basis between the two CDS spreads, despite the fact that they are referencing the same entity. Indeed, the persistent Quanto basis reflects a strong devaluation jump of the JPY against USD upon a Japan sovereign default – and those who bought the CDS contract settled in USD will have to pay a higher premium in order to shield themselves from the FX devaluation risk. This illustrates that the CDS market has been pricing in WWR consistently, that is, the FX-credit interaction as a devaluation jump upon a counterparty default. 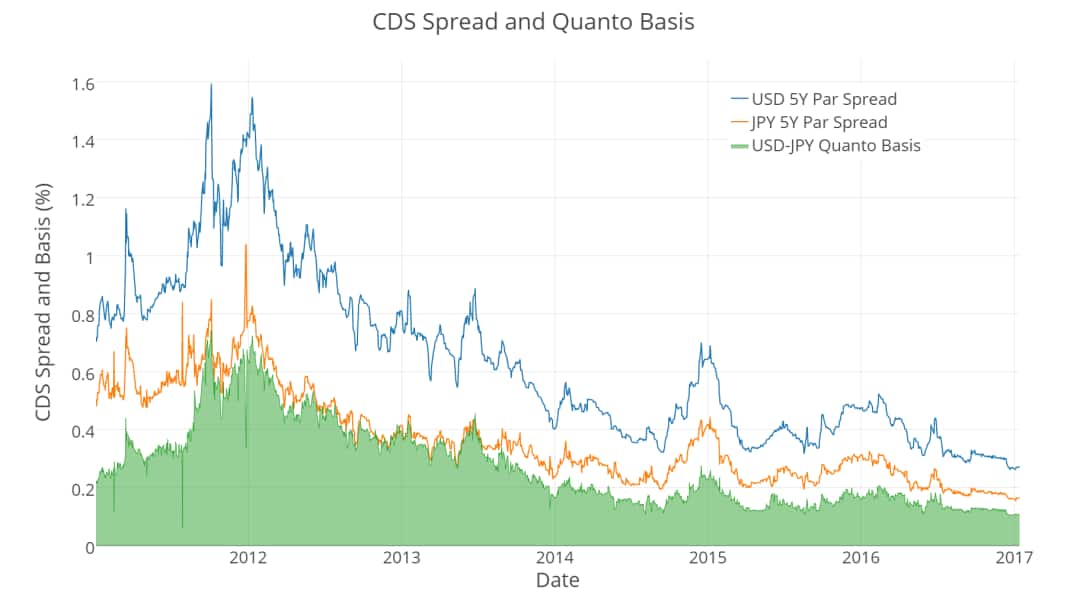 According to the no-arbitrage argument, one can long a CDS contract in JPY and short a Quanto CDS contract in USD, and since the underlying credit events are identical, what is left behind in the portfolio is the FX risk of the dollar-yen exchange rates at default. This insight leads to the rule-of-thumb:

where γ is the jump size of the FX risk factor at the counterparty default, SJPY and SUSD are the CDS spreads denominated in JPY and USD respectively. The estimated FX jump size can be readily used as the input parameters for the FX jump-at-default xVA WWR model implemented within the IHS Markit xVA solution.

In Figure 2, we plot the historical mean and standard deviation of the implied FX jump size for different counterparties. A number of interesting implications can be drawn. Firstly, all of the implied FX jump sizes are significantly negative (i.e., JPY devaluation), suggesting that the CDS market has been consistently pricing in WWR between FX rate and credit default for these systemically large counterparties. Secondly, the implied FX jump size is strongly related to the systemic importance of the reference entity and we observe a decreasing impact of FX rate down the spectrum, confirming the anecdotal evidence that the Quanto CDS implied jump size is related to systemic importance (Pykhtin and Sokol, 2013). The similar level of FX jump sizes across industry groups also points to the possibility of building a “sector basis curve”, hence allowing one to estimate the FX-WWR for a wider range of counterparties. For a more detailed analysis, we will shortly be publishing a technical white paper on the calibration of WWR models to the Quanto basis. 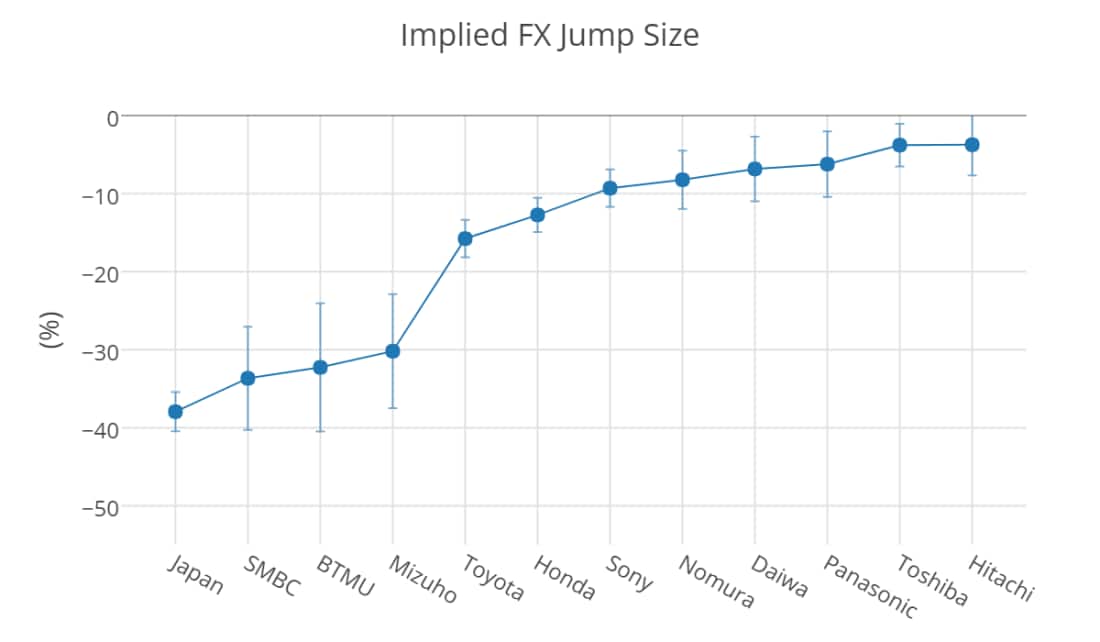 The FRTB-CVA regulation requires banks to apply WWR modelling when the dependence between exposure and counterparty credit quality is significant. To make this judgment, one can be complemented by market-implied information from the Quanto CDS data – a significant Quanto basis indicates the counterparty is exposed to FX-WWR which requires monitoring and active management. Our analysis shows that for these counterparties the CVA WWR add-on could be 50% higher against the no-WWR baseline, and therefore choosing a proper jump-at-default WWR model is critical to capture the impact.