Crude transport by rail has become an enabler of supply growth in North America—connecting growing production to refiners across the continent, but what does the future hold for the growth of crude oil transport by rail?

Shipments by rail were the dominant form of transport in the early decades of the North American oil industry. But, rail was supplanted by the growth of a major pipeline infrastructure. Then in 2009, North American crude oil production began to surge—driven by unconventional growth from tight oil and oil sands. Growth has occurred so rapidly that pipeline infrastructure has struggled to catch up. The North American rail system offered immediate and flexible capacity along with an extensive network.

In less than five years, the volume of crude shipped on North American railroads has moved from near zero in 2009 to anticipated annual average movement of 1.1 million barrels per day in 2014—about 9% of North American production. 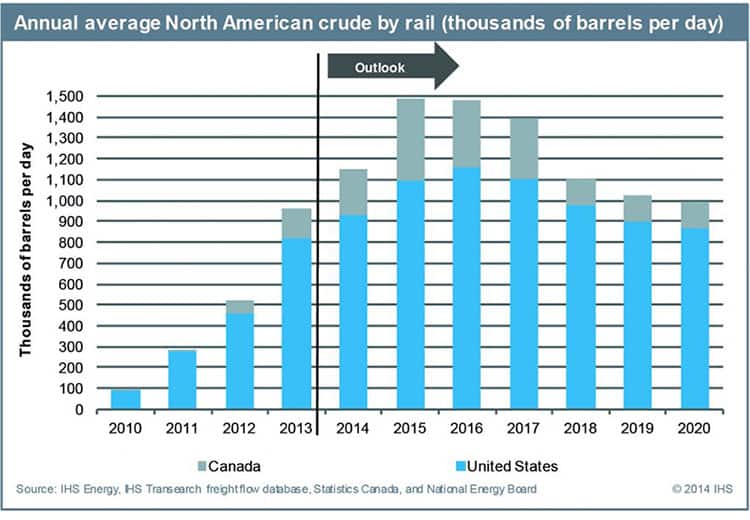 US tight oil supply growth has been responsible for 80 percent of the crude oil being transported by rail. However, movements out of Canada are beginning to build; expected to average over 200,000 b/d this year.

The outlook for the growth of crude-by-rail is uncertain with the crude-by-rail being linked to production growth and the timing of new pipelines. A lower price environment could make production growth fall short of expectations, reducing demand for crude transport by rail, while delays in new pipeline capacity would work in the opposite direction. IHS anticipates rail transport of crude oil could peak beneath 1.5 million barrels per day between 2015 and 2016.

Another uncertainty facing crude by rail is pending regulations aimed to address the safety of the transportation method. As crude-by-rail volumes have grown, a number of accidents have occurred. Lower speed restrictions, heavier tank cars, and a proposed phase-out of the existing tank car fleet could all impact crude by rail operations adding additional uncertainty to future movements.

These issues are explored in the recently released IHS Special Report: Crude by rail: The new logistics for tight oil and oil sands growth. Download this report for free.

#Energy prices continue to rise - how long might this increase last? And, are there #gas market stabilizers ahead?… https://t.co/EhKbTmCfp9

The #biofuels industry will play an important role in the transitioning of the #energy industry – but how prepared… https://t.co/2kODBwaL3o