As part of the OPEC+ agreement, Russia should now have reduced its crude oil output. According to recent data provided by IHS Markit's Commodities at Sea, the country's seaborne exports infact increased in March, surpassing five million barrels per day (bpd). The total oil output is estimated to have reached 11.3 million bpd, missing the target. Earlier this month, Russia's Energy Minister Alexander Novak noted that the plan was to speed up oil output cuts to meet the agreed cut of 228,000 bpd against October levels. 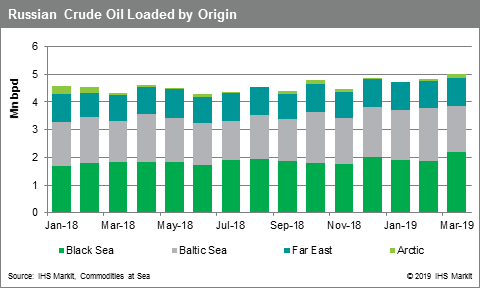 This will have caused a headache for OPEC members, as the cartel struggles to keep Russia on board with the agreed oil cut. OPEC's major producer Saudi Arabia has the hard task of convincing Russia to remain in the OPEC-led pact cutting oil supply, as Moscow initially agreed only for six months and an extension for three more. Mr Novak made it clear to his Saudi Arabian counterpart Khalid al-Falih, during a meeting in Baku last month, that an extension to the end of 2019 cannot be guaranteed. Russia is expected to extend in June but only until the end of September, as domestic pressure has been increasing with some companies openly expressing how unpopular this agreement has been.

Since the OPEC+ alliance was formed in 2017, oil prices have doubled to more than USD 60 per barrel, driven by a series of production cuts among its members. Current oil prices won't be maintained, if Russia pulls out. OPEC members could be forced to continue with the plan, but this would certainly change the dynamics. 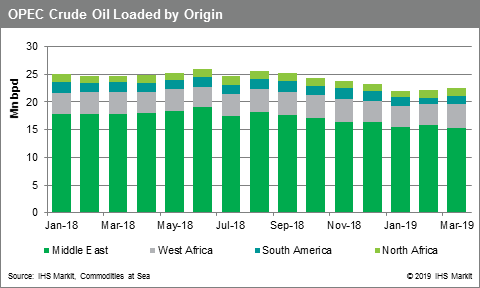 In terms of compliance with the agreement, producers across the Middle East seem to have reduced their output and seaborne exports, while an increase has been observed in West and North Africa, with the latter primarily driven by the recovery in Libyan output. The crisis in Venezuela has kept volumes from South America at relatively low levels, but higher than earlier anticipated.

Meanwhile, US President Donald Trump called for an OPEC production boost to push oil prices lower. Russia realizes that Saudi Arabia targets oil prices at a minimum USD 70 per barrel to meet its budget requirements. But for Moscow, anything above USD 55 per barrel is enough to balance its books. An OPEC+ meeting previously arranged for mid-April was scrapped, with any decision now expected in June, once the market responds to the new US sanctions on Iran due in May.