Crude Oil Trade: When it rains, it pours for Brazil, although VLCC shipments on the rise

Following an oil spill which affected more than 200 beaches across the country, state-run oil company, Petrobras, has been hit with another potential issue, general strike action. The strike action is over the company's proposed annual wage hikes, which stand lower than the expected annual inflation rate, the strike could come less than a month before Brazil holds its biggest oil auction yet.

This auction includes assets worth as much as USD 50 billion, such as blocks previously explored by Petrobras, with estimates suggesting that up to 15 billion barrels could still remain to be explored. The winning bidders will have to arrange compensation for Petrobras for having already explored part of this area. The company expects to net anywhere from USD 25 to 45 billion. Oil majors including Exxon Mobil and Shell have expressed their interest.

Buzios, one of four prospects (together with Itapu, Sepia and Atapu) at the heart of the pre-salt oil deposits, is already the second-largest field by production in Brazil, with output having surpassed 400,000 b/d, with four platforms already operating and at least three more to follow. 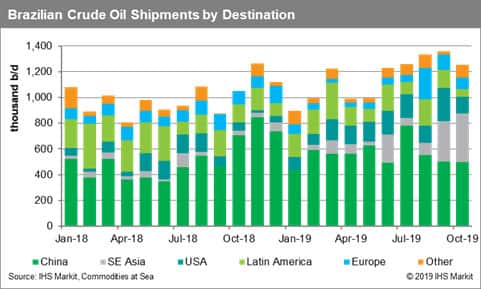 According to IHS Markit Commodities at Sea, shipments to China have remained close to 500,000 b/d, since the country increased its storage capacity in South East Asia, primarily Singapore, with the country having shipped almost 400,000 b/d to the region during the first 20 days of October. We expect these flows to increase further, as Brazil will continue focusing on Chinese demand, with strategic views to further expand its storage capacity in South East Asia. Flows to the US have been significantly lower so far this month, almost 50% down month-on-month, but only marginally lower than August's levels. It has been impressive how sharply flows to nearby importers across Latin America have dropped this month, with Brazil having only shipped 60,000 b/d so far, which will probably be a new record low for this trade. Overall, shipments in October will end 5% lower than a month ago, with flows on Suezmax and Aframax tankers deeply falling, while VLCC loadings have surpassed 800,000 b/d once again after July. 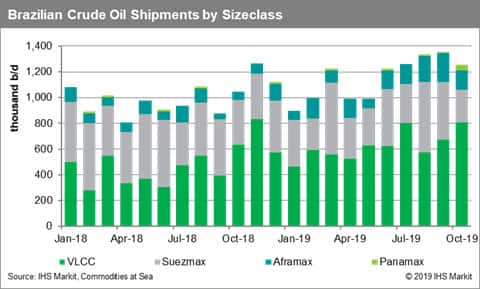