Spot rates in the Middle East Gulf have increased dramatically on Thursday and Friday after two tankers were attacked in the Gulf of Oman. Concern around tensions in the region pushed forward rate agreements (FFAs) and spot rates much higher, with a VLCC now getting paid more than 15,000 USD per day to carry crude oil from the Middle East Gulf to China, much higher than the 11,000 USD per day it would earn two days before the incident.

However, there has been only limited activity since then, as most owners avoid fixing before the picture is clear. They still await new insurance quotes. Meanwhile, July contract rate has been pushed close to 25,000 USD per day, as supply is expected to tighten over the next couple of weeks, with most ballasters now heading to other exporting regions, such as West Africa.

The increase is partially driven by expectations of higher insurance costs, together with the anticipated increase of bunker fuel prices in the region. Over the next couple of weeks, vessel availability near the Middle East Gulf is set to drop, since several owners will consider targeting other loading areas to avoid the risk of another attack against oil tankers. The tightening up of supply could then push spot rates in the region much higher, closer to levels last seen in 2019 Q1.

Some Greek owners proved to be ready to take up the risk and fix some of their ships to quickly get the advantage of the spike, while most other owners simply wait to see what could follow. Essential information still needs to be provided by P&I (protection and indemnity) clubs, as the market expects additional war risk premiums. Some of the major names in the market, such as Sovcomflot, Trafigura and DHT Holdings have already suspended any activity in the region last week.

If the tension between the US and Iran escalates further, then the reaction could turn much more drastic, with spot rates in the Middle East Gulf to secure more support in case of more disruptions in local oil flows. Major oil importers will then prioritize to urgently stockpile to avoid outages and upcoming price spikes.

With a plethora of ships of different types getting blockaded within the Gulf, more time will be required to securely exit or enter the region, which will allow owners to demand a premium to approach the loading areas. Most requests by the end of June have already been covered, with 43 VLCC's fixed to load in the Gulf so far. 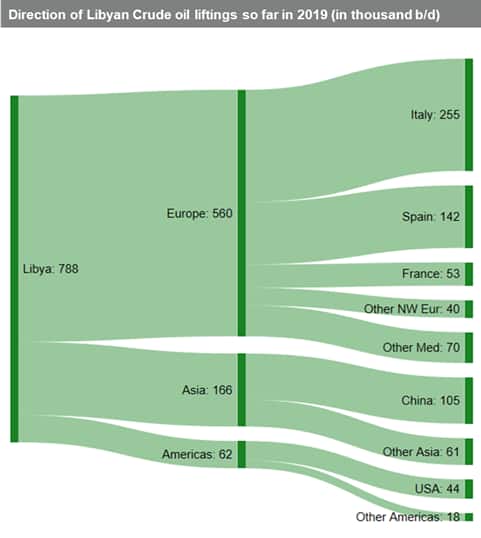 For as long as Iran does not get directly attacked, any major disruption is not considered very probable. The market looks to be rather well balanced so far, especially as demand is muted due to refineries in maintenance across Asia. Meanwhile, oil stocks have been hitting record highs for this year across many importing countries.

But in any different case, if the US and its allies decide to target Iran directly, massive disruptions could be observed in a short time. Oil trade flows through the Strait of Hormuz would then fall sharply, with a spike to follow both in oil prices and tanker rates, as none of the other regions could step in to fill the gap and add up to 17.5 million b/d of crude exports.

Crude oil liftings from the Middle East Gulf already reached rather low levels during last week, the lowest for this year excluding the limited activity during the Christmas week. However, activity is expected to return back to normal levels quickly this week.