April was a difficult month for VLCC owners, with freight rates in the Middle East Gulf still feeling the pressure of OPEC production cuts. The market experienced another drop last week, with April's average standing marginally above USD 10,000 per day for VLCCs carrying crude oil from the Middle East Gulf to the Far East, with vessels heading to Singapore having earned a bit more, around USD 13,700 per day. This is significantly lower than levels observed in March, when a VLCC would get paid more than USD 31,000 per day. Year-on-year, freight still stands much higher. Based on seasonality, May and June might be tough, but optimism rises for the second half of 2019 as market fundamentals are set to improve. 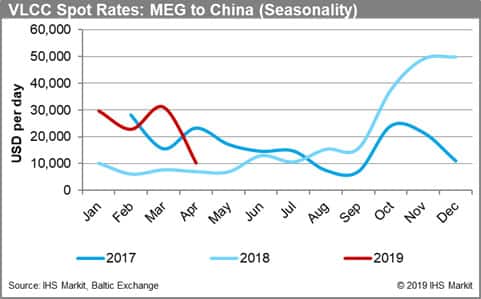 For now, activity in the Middle East Gulf looks muted, with some of the available older vessels securing cargo liftings at discounts around WS6, pushing the total market down further. Early May is already covered, with 44 VLCC loadings already agreed for May's first decade. The second decade of May currently stands at 13 fixtures already. However, there's still hope among charterers that mid-month could be much busier, which could support rates and push them higher. But excess tonnage is still there, while refinery maintenance outages in East Asia will also impact demand.

Meanwhile, Atlantic demand cannot drive any recovery in the near-term, as tonnage already gathered in the region during the last couple of weeks has been absorbing future loadings. Focusing on West Africa, we already have ten VLCCs fixed for each decade of May, with only limited activity to be expected from now on, while the Caribs can't absorb much more, with 12 ships fixed already for May's first decade, and eight more already agreed for each of the two following decades. 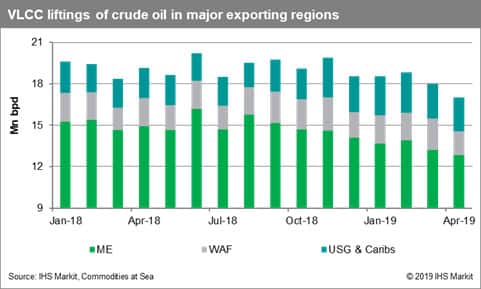 The only positive has been the increasing interest for floating storage in Southeast Asia, with more VLCCs, typically older, employed near Singapore. The sentiment among owners of older VLCCs seems to have changed dramatically since last year. Back in 2018, the poor performance of VLCCs during the first three quarters of the year pushed 34 older VLCCs to demolition, but the rapid recovery since early October 2018, driven by the significant number of additional liftings in the US Gulf, brought this trend to an end, as older vessels secured employment.

Meanwhile, as we approach 2020, there is much more demand for floating storage especially for cleaner fuels and other clean products. Many owners of older VLCCs now only consider liquifying their assets at a significant premium against residual values, with recent transactions suggesting that such vessels could easily be positioned at around USD 21 Mn instead of the USD 17 Mn a broker would offer. Great news for owners of vessels older than 15 years old and especially those controlling assets well maintained and in general considered of good quality. The life expectancy of vessels like these could be extended beyond 25 years, at least for a couple of years, allowing most investors to operate these assets for at least half a decade. We've seen more than six sales of this type already in the first quarter of 2019, with much more to follow. This could be a significant support to the freight market, even if scrapping remains low for the next couple of months, in reality these vessels won't be active in the crude oil market as we'd typically expect. However, this trend also creates a threat for the market, as several owners might try to postpone a decision to scrap and instead try to find similar opportunities in the market.