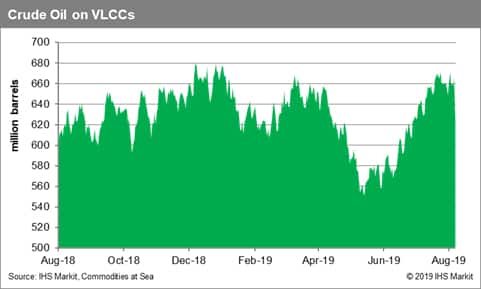 With oil prices deepening fast, it has become clear that employment has been increasing in the VLCC market, even older units have secured voyages lately, as some charterers have started accepting previously discounted and avoided vessels. As data by IHS Markit Commodities at Sea shows crude oil carried on VLCCs has increased dramatically since a month ago, having reached levels last seen in late 2018 early 2019. The limited availability of open ships in the Middle East Gulf (MEG), together with more ballasters moving to other exporting regions, due to the concern among some owners around the tensions in the region, has further supported the market. Charterers like SPC and KPC have been booking units slightly above or below WS 50 for cargoes from the MEG to Far East. As the sentiment is strong, the premium for Singapore has been marginally widening. 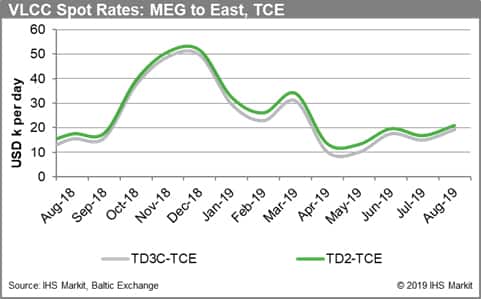 It took less than two weeks for the TCE of a VLCC carrying crude oil from the Middle East Gulf to the Far East or South-East Asia to more than double, the rate went from USD 11,200 per day to USD 31,000 per day. What a nice surprise for shipowners who have been struggling with low freight rates last month. Demand seems to have strengthened dramatically in all major exporting areas, while the cost of bunker has been falling. TD3C gained more than ten points, currently standing at mid-50s. It's the same story to tell for VLCCs loading from West Africa and heading East. A VLCC can now be fixed to load from WAF for at least USD 30,000 per day, double as much as it would have recieved a week earlier. Charterers like Unipec and BP have been very active in the region lately. 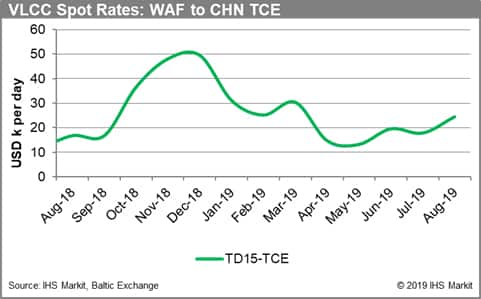 Focusing on activity in the US Gulf, freights both for imports and exports have improved. However, TCE for TD1 remains negative, having approached USD -1,000 per day, much better than levels around USD -11,500 per day, the average of July's last decade. Meanwhile, a VLCC carrying American crude oil to the Far East is now getting fixed for around USD 31,500 per day, USD 12,000 higher than a week ago. However, the sentiment hasn't improved much, as activity is expected to slow down once again later this month, at least in the short-term. The last quarter of 2019 might be much better, but only time will tell if we just experienced the beginning of the long-anticipated recovery of VLCC rates. For now, most owners are simply enjoying the higher daily earnings, which they haven't seen since late June. 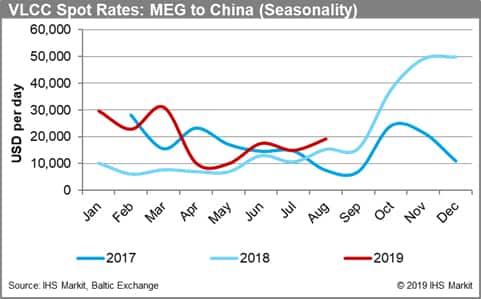