Saturday's drone attacks on Saudi Arabia's critical oil production assets will drive up uncertainty in the global tanker industry given the region's huge sway on the crude oil shipping market. Already reeling under heightened tensions in the Strait of Hormuz, VLCC owners could see demand weaken over the next few weeks amid lower export volumes out of Saudi Arabia.

Even as Saudi Arabia crude oil loadings on VLCCs in Ras Tanura don't appear to have dipped materially and are maintaining normal levels, the real test for the shipping demand lies ahead. IHS Markit Commodities at Sea has identified three loadings on VLCCs on 17th September, all heading to the Far East signaling drawdown of inventory.

Barrels of Crude Oil loaded from Ras Tanura in September 2019

Impact on VLCC rates could only be determined by the volume of production affected and extent of export volume loss. During this and probably next week, the segment will be hit by a rapid decline in cargo volumes out of Ras Tanura. VLCCs have been carrying more than 90% of Saudi Arabia's exports, typically for destinations across the Far East. With less cargo expected, several operators will decide to reposition their ballasters to other exporting regions, such as West Africa and US Gulf. However, current loading schedules don't allow a lot of optimism to be developed, as most loadings by the end of September and early October are already fixed, as shown below. 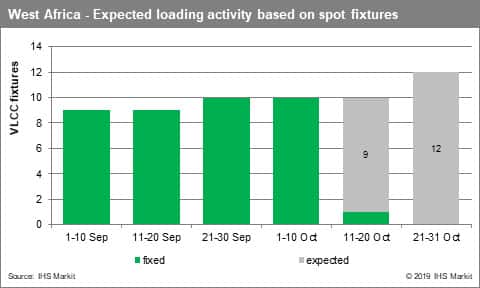 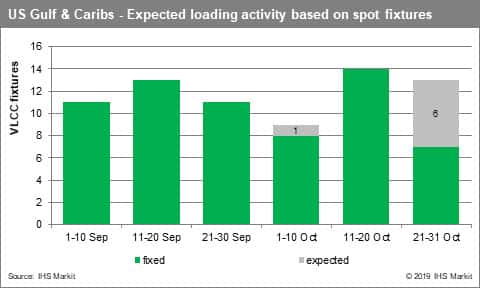 VLCC Loadings in the region will probably fall to around three per-day, as occured during the last couple of days. However, freight rates might react in a very different way, as the increasing risk of war between the US and Iran will further boost rates for the segment around the world.

With Asia having absorbed most of Saudi Arabia's barrels, countries such as China, India, Japan, and South Korea will need to source more crude from elsewhere, most probably from the US, Latin America, and Russia. Some buyers, especially in China and India, could even try importing from countries under US sanctions, Iran and Venezuela, but trade flows from these two countries remain low, at least for now.

Loadings from the Red Sea is expected to be affected as well, as the Abqaiq field has been supplying the Red Sea as well, with a nameplate capacity of five Mn b/d. Yanbu exports typically stood close to half a million b/d for VLCCs and roughly 100,000 b/d on Suezmax ships. This translates, two VLCC cargoes per week and around one per week for Suezmaxes. This typically represented around 10% of Saudi Arabia's exports, usually ending up as European imports. Even Aframaxes will be affected in the region, as cargoes of DPP loaded in Yanbu will fall quickly, while loadings from Sidi Kerir to Europe will decline sharply. Especially, as Saudi Arabia is expected to prioritise long-term contracts, primarily with Far Eastern importers and India. Europe will have to heavily rely on alternate suppliers, probably the US, North and West Africa.

Tonne-miles could increase in some cases, but meanwhile demand in terms of volume might decline, as higher oil prices might prove strong enough to make Chinese buyers control their appetite for more oil, even as we approach IMO 2020. Japan, South Korea and India will probably start replacing some Saudi Arabia barrels with US light grades, with a much longer distance to be covered by VLCCs.

Russia has been recently targeting more exports to India, a route that could be supported due to the lack of Saudi Arabia barrels over the next month. China might lean even more heavily on West Africa and South America, to avoid imports from the US.

Overall, Saudi Arabia might prove flexible enough to offset most of the loss in production through inventories, but the country's crude oil stocks have already reached the lowest levels in the last decade, even before the attack.