The big question in the market once the US imposed sanctions against Venezuela earlier in 2019 has been "then who?". This refers to the importer(s) that could step in and fill the gap of flows primarily to the US, then China and India, especially as China's appetite for additional crude supply remains quite strong, in contrast to the US. OPEC would be the first response, especially since flows to the US are set to further decline, but as the cartel agreed to reduce its output and keep its shipments around 23 Mn bpd, much lower than the levels last seen in October 2018.

This means that China must think out of the box, relying on smaller but still significant producers around the world. In terms of grades that could replace Venezuela, some of the countries nearby could be an easier option for them. Imports from Brazil have recently surged, with several Chinese refiners rushing to import heavier grades of crude from Brazil. Petrobras reported that China absorbed two thirds of their crude exports in 2018. 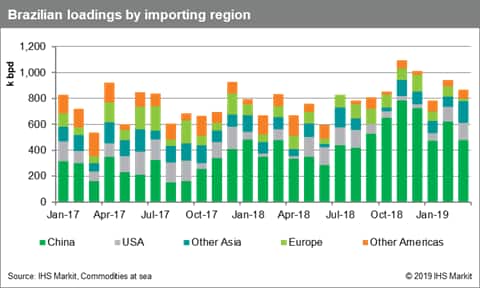 According to recent data provided by IHS Markit's Commodities at Sea, Brazil exported more than half a million barrels directly to China during this year's first quarter, with the volumes reaching around 660,000 barrels if we include shipments to Singapore and other destinations across Southeast Asia that were later re-exported to China. The increase year-on-year is estimated to have reached almost 50% so far. Bearing in mind that Brazilian output is expected to further increase, by around a third to a million barrels by the end of this year, we could expect flows to China to strengthen much more in the second half of 2019. However, we should also consider how popular the country's Lula grade has been among other importers including the US, especially after the sanctions against Venezuelan barrels.

Petrobras started exporting Buzios, a new grade of crude oil, since the last quarter of 2018. This grade has been produced since April 2018, in the pre-salt region of the Santos Basin. Local capacity to process Buzios is expected to reach 750,000 barrels of oil by 2021. This is a medium heavy crude, with an API gravity of around 28.4 degrees and with sulfur content around 0.31%.

Brazil seems to be a very good match for China, whose refinery capacity is expected to increase significantly by the end of 2019 and obviously cannot rely on crude production from the Middle East. This development could prove beneficial for VLCCs positioned in the Atlantic. The crisis in Venezuela has been working in favour of Brazil, particularly as the country manages to increase its market share with Chinese demand. China seems to have significantly less options available for now, especially as the US keeps an eye on Brazilian output to fill any domestic gaps.

Other minor exporters in the region, like Colombia, have been materialising gains as well, driven by the collapse of Venezuelan exports. The market for heavy sours turning tight has supported prices for Latin American crudes. A good example has been Colombian heavy-sour Castilla Blend, with the discount versus ICE Brent for future loadings narrowing significantly during the last month. The strong demand for Castilla and Vasconia reached levels not seen during the last six years. 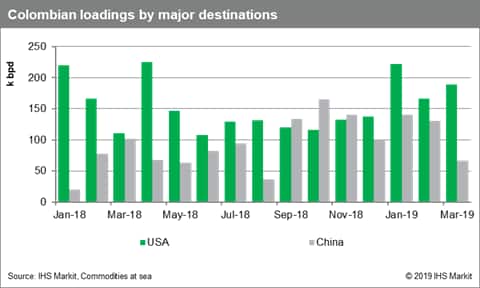 However, there are market experts expressing their scepticism around Brazil's ability to maintain its growth projections, as the country's shipments fell in January before recovering in February and marginally decreasing in March once again. Performance during the last year provides us with an understanding of how volatile Brazilian loadings can be. The addition of new platforms in the Lula Norte area and at Buzios has been expected to support the country's output. Brazilian production is set to reach 3.3 million barrels by the end of the year. Brazil is one of the few non-OPEC countries, together with the US and Canada, that could increase its output significantly in the near-term.