Beijing has made it clear that its support to Caracas will last, after the recently announced expansion of Chinese investment in Venezuela's oil industry. The plan is to increase production by 120 thousand b/d. The investment, worth 3 billion USD, financed the construction of "Jose", a new oil blending plant, located in Barcelona, Anzoátegui State. This project will be run by the Sinovensa joint venture, which is 49% owned by China's CNPC and 51% by PDVSA. Extra-heavy grades from Venezuela's Orinoco Oil Belt will be blended into Merey, which has been quite popular across Asian importers.

The current production of Sinovensa stands at 110 thousand b/d and is expected to reach 165 thousand b/d with the addition of the new blending plant. After completion of the second stage, production will stand at 230 thousand b/d. Meanwhile, The Petropiar extra-heavy crude upgrader plant has been converted into a blender facility earlier this month. Production will increase by 130 thousand b/d of Merey, which will make this grade the country's primary export. Caracas is understood to be very active in finalising maintenance contracts as well, with work to be taken during the next six months.

The trade war between China and the US seems to be further escalating, with Beijing getting prepared to provide more funds to Venezuela to support its oil industry. Without a doubt, this will prove a rather difficult task. Venezuela's oil industry has collapsed and its output standing below 800 thousand b/d since early 2019 Q2, well down from last year's production levels.

Venezuela's major difficulty has been satisfying domestic demand for fuels, estimated close to 250 thousand b/d, with importing more fuel left as the only solution. Fuel imports during July have been estimated to have more than doubled since June, having reached 196 thousand b/d, with Russia's state-run firm Rosneft having supplied most of that through STS movements across the Med. 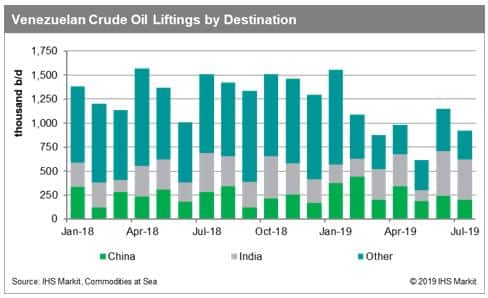 Meanwhile, more Venezuelan barrels have been carried to India, after the end of waivers on sanctions against Iran. New Delhi seems to have been forced to diversify away from the Middle Eastern supplier, but its response hasn't exactly been following US wishes, as trade flows from Venezuela to Iran have been increasing rather fast, something that Washington can't be happy about. Based on IHS Markit's Commodities at Sea, crude shipments from the Latin American country to India have remained strong, close to 450 thousand b/d since June.

US sanctions on Venezuelan crude oil have been simply ignored by most private Indian refiners who continue to import oil from the country, including both Reliance Industries and Nayara Energy. Both companies have agreed to purchase crude from PDVSA for long, with contracts signed years ago. Reliance has a 15-year deal, which started in 2012, for volumes up to 400 thousand b/d.