Venezuela's crude oil exports continued to fall in August, estimatations suggest they have reached their lowest level this year. China increased imports last month, but shipments decreased as purchases have been recently halted due to tougher US sanctions. Venezuela's total exports of crude oil marginally surpassed 600,000 b/d, with another 170,000 of oil products estimated to have been shipped from the Latin country last month. 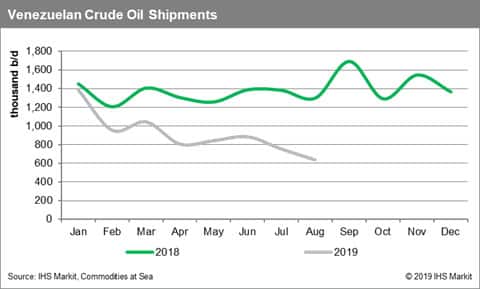 Some Chinese buyers, including state-run CNPC, have been cancelling shipments of Venezuelan barrels previously scheduled for August, due to Washington warning that property of foreign companies in the US could be frozen if they do more business with PDVSA. Venezuela has been delivering oil to Chinese firms to repay loans, worth billions of dollars.

Meanwhile, the share of Russia's Rosneft in Venezuelan oil has been strengthening, with China typically importing these barrels. Almost two thirds of total exports were lifted by Rosneft in August, much higher than the activity observed in July. Barrels identified by IHS Markit Commodities at Sea exceeded 13 million last month. Transactions between the two companies are done in Euros, as repayment of debt owed to Rosneft for loans over previous years. Outstanding debt to Rosneft dropped by USD 400 million in Q2 2019, having reached USD 1.1 billion.

Some European countries still import a small volume of Venezuelan barrels as well, with Spanish oil firm Repsol continuing to swap refined products for crude. Meanwhile, Venezuela has been exporting around 35,000 b/d of crude oil to the Caribbean Islands, primarily Cuba. Shipments to India recently reduced sharply, while August imports still stood close to 250,000 b/d. However, this number is set to decline in September. 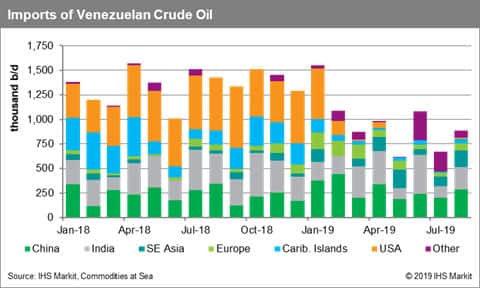 Chinese imports of Venezuelan crude oil increased last month, having surpassed 250,000 b/d, but this trend might not last for much longer, even after the recent news that China plans to support the Latin American producer in increasing production by expanding output in the Orinoco belt. However, with Rosneft continuing to take care of shipping and marketing operations for Venezuelan oil exports, even if trading houses such as Trafigura and Vitol have stepped away, flows to China and India will proceed, including movements on vessels not sending a signal, as happened during the last couple of months.