Producers across South America seem to have dominated the interest of the market recently. From the one side, Venezuelan crude oil production is set to fall further, if US sanctions remain in place, and is now expected to reach 750,000 bpd during this year, down around 560,000 bpd within a year, from around 1.3 million bpd where it stood during 2018. This, however, gives space for other producers, especially those nearby, to expand their production and quickly fill the gap. As the political situation in the Latin American country isn't expected to improve any time soon, the scene changes quickly, and forecasts suggest that the output of the region will look rather different within a couple of months. The trend observed so far is Venezuelan loadings declining rapidly as shown in the chart below. 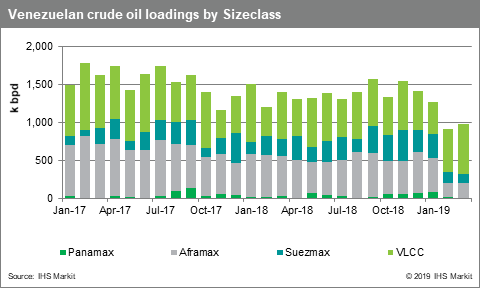 The positive scenario would be Venezuelan managing to quickly improve the political climate which would allow PDVSA to repair the damage suffered so far. But it looks more likely that the situation will worsen, with several experts now only expecting the country's production and exports to collapse. And this could last, if the de facto ban on US imports of Venezuela crude doesn't change. The country's oil production has fallen significantly during the last two years, even before the US sanctions, having reached historical low levels, at least for this decade.

PDVSA has been struggling to operate wells and other facilities due to electrical problems across the country, since last week. Oil wells were halted, with production already stopped at some fields across the country. The situation has been more difficult in the west of the country, where lighter grades are pulled from wells. Output has been less affected in the Orinoco Belt, which represents over 50 per cent of the country's total production. PDVSA runs joint ventures with Equinor ASA, Chevron Corp, Total SA, Rosneft and Repsol SA in this area.

On the other side, Brazil, Colombia and Mexico have been increasing their output, as the most recent data suggests. Focusing on Brazil, the country seems to be going through a dynamic recovery, five years after prosecutors exposed long-running bribes-for-contracts at state-run oil firm Petrobras. In parallel to further increasing its exports, the state-controlled oil company recently announced plans to cut USD 8.1 billion from its operational costs by 2023. Economy on costs will be mainly based on reductions in expenses with employees, as the company will launch a voluntary lay-off plan soon, and with lower expenditures in advertisement and office spaces. It also plans to sell some mature oil fields in Brazil. 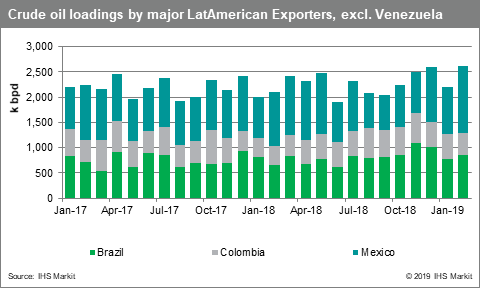