Crude Oil Trade: Venezuelan exports through the eyes of OPEC and Russia, everything is fine

With most experts anticipating Venezuela's output to further decline over the next couple of weeks, PDVSA, the country's state-run oil produce, just announced the addition of a new subsidiary office in Moscow by next month. The country's oil minister Manuel Quevedo, who participated in the OPEC+ meeting in Baku, noted that the country managed to increase its output to 1.432 million bpd in February. There's no doubt that the dialogue between Caracas and Moscow might produce interesting news for crude oil trade flows in the near term. Russia is one of the few countries still recognizing Nicolas Maduro as Venezuela's president. Meanwhile, PDVSA has been implementing all its agreements with Russia's top producer Rosneft, according to Mr Quevedo. PDVSA's outstanding debt to Rosneft stood at USD 2.3 billion at the end of last year, all under crude and oil product supply agreements. Rosneft doesn't seem to have any concerns around the probable danger in the Venezuela crisis. According to OPEC's largest producer, Saudi Arabia, Venezuelan production has already stabilised this year, with the sanctions imposed by the US on PDVSA only affecting the direction of their exports. According to Saudi Arabia's oil minister Falih al-Khalid, more barrels are now heading to Asia, instead of the US Gulf coast, but with the global market still absorbing similar volumes of Venezuelan barrels.

However, recent data made available through IHS Markit's Commodities at Sea suggests a different story. Venezuela has suffered massive losses, with nothing exported to the US so far this month. Meanwhile, flows to China and India remain quite strong, but they don't seem to be enough to maintain the country's exports close to levels seen last year. 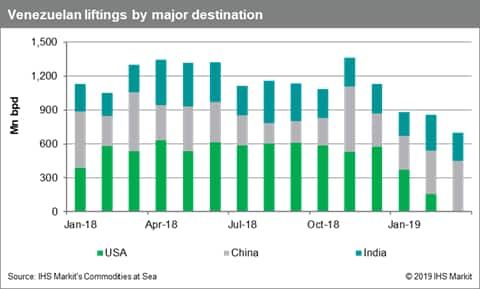 The International Energy Agency (IEA) seems to agree with the trend observed, highlighting the potential impact that the Venezuelan collapse could have on the global market. There's no doubt that OPEC members could step in if needed to provide a "supply cushion", but this would mean that the US would need the support of the cartel to avoid any dramatic increase in oil prices.

IEA is worried that crude supplies from Venezuela could fall sharply, creating a real "challenge" for the global oil market. The good scenario would be OPEC members to quickly cover any shortfall, but we must consider that this situation could support further increases in oil prices, something that several OPEC members have been waiting for since 2014. The IEA urges global producers to think, around 1.2 million bpd of oil supplies have been disrupted. This accounts for more than one per cent of global output. The Agency does recognize though, that recently we have observed the first signs of improvement.

Meanwhile, oil prices hit USD 68 per barrel last week, a year-high. "A major loss of supply from Venezuela" could mean serious disruption to the oil market, suggesting "that the market is tightening".