Recent data by IHS Markit's Commodities at Sea suggests the US has started increasing its imports from exporters across the Americas and West Africa. Trade flows from Colombia, Nigeria, Brazil and Angola have been strengthening during the last couple of months, with May volumes expected to double for some producers. This hasn't come as a surprise as the country seems to have quickly switched away from Venezuelan barrels since February.

Loadings from Angola and Nigeria destined for the US expanded by almost 80% in April month-on-month, having surpassed 300 thousand barrels per day (b/d). 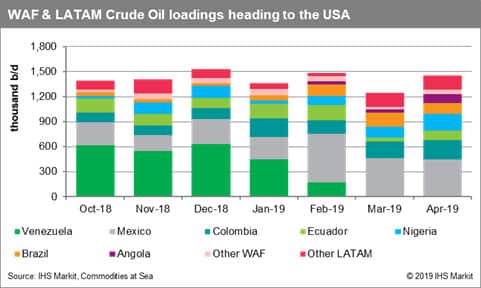 The other major provider of crude oil to the US, Iraq, further increased its exports as well, with direct shipments from the Middle-Eastern country having reached almost 400 thousand b/d in April, with the summer driving reason expected to push these numbers even higher in May. Flows from Saudi Arabia have been strong as well, having more than doubled since March. 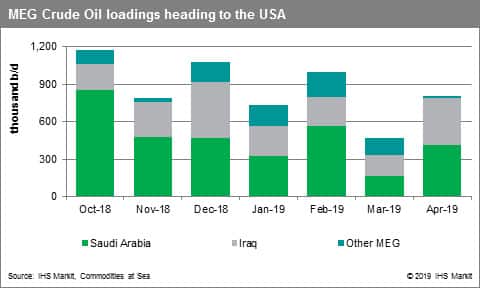 There have been no shipments from Venezuela to the US since February, which has had a huge impact on global trade flows of crude oil, with US oil imports driving changes elsewhere, as the country has been absorbing more barrels from nearby exporters and other major producers. This has been driven primarily by domestic refineries previously relying on the heavy crude of Venezuela to shop elsewhere for similar-grade crude, increasing the interest for grades such as Colombian Castilla.

Meanwhile, April seems to have been a rather difficult month for Venezuela, as some of its major customers since the US imposed sanctions on the country's crude oil, like India and China, squeezed their imports quickly. Shipments from Venezuela to India fell dramatically in April, but only time will tell what might follow, since India will have to replace another gap, the Iranian barrels imported before May 2.

Elsewhere, oil prices fell sharply early this week, with Brent pushed marginally below USD 70 per barrel. This followed US President Trump's threat for higher tariffs on Chinese goods. Another parameter supporting lower oil prices has been Saudi Arabia announcing lower prices for oil exports to the US. This has brought the oil market back to levels last seen a month ago, before any geopolitical concern and signals that global supply is further tightening pushed prices close to USD 75 a barrel.