Market conditions continue to change lately, with sentiment adjusting to recent news. Oil prices have been falling during the last couple of days, with Brent now standing below USD 70 per barrel, for the first time since early April. WTI followed a similar path, with the price pushed below USD 60 per barrel after remaining above this level for almost two months. The decline has been mainly driven by growing concern around the global economic performance, with a significant growth slowdown now considered a rather probable scenario.

The geopolitical risks that could affect global demand in parallel to supply outages together with the increasing aggressiveness expressed by both major economies, the US and China, bring more uncertainty to the table. The trade war environment pushed expectations for global growth to lower levels, pressing oil price movements as well.

From the one side, the Trump administration announced higher tariffs on USD 250 billion worth of Chinese goods earlier this month. China's response, meanwhile, has started to take shape as the country raised tariffs on USD 60 billion of US goods effective 1 June 2019, with many key US energy products being subject to higher tariffs in China. Crude oil will remain the only exception with 0% tariff, but trade flows since September 2018 suggests the country has been simply avoiding increasing its exposure to American barrels.

Supply alternatives cannot be easily found for commodities like ethane and propane, with prices pushed much higher due to the limited options to shift to other importers. For crude oil, concern raises in parallel to growing uncertainty as global supply faces the risk of further disruptions together with the impact of the US sanctions on Iran and Venezuela and OPEC supply cuts.

Elsewhere, as global auto sales continued to slow, automakers around the world have been focusing on rationalising their operations, with Ford adding to the list of companies laying off thousands of people.

Without doubt, as the US crude oil inventories continue to rise, with stocks having reached their highest level since late July 2017, parts of the market do not seem to accept that global supply might be turning tight in the near future, even if the OPEC+ agreement is still in place and most importers have been avoiding Iran. US inventories, however, are not the only indicator to consider, especially as the risk of further disruption around the world still stands. US stocks are now also affected by the country's oil production, as domestic pipeline capacities remain insufficient. This has been another factor pushing WTI to trade at a significant discount of nearly USD ten against Brent. Most OPEC members, especially those across the Middle East Gulf, would remain reluctant to increase their production for as long as the US stocks keep on rising.

The weakness of oil prices might not last for long, as the next OPEC meeting takes place in around four weeks. An extension of the production cuts plan, even if Russia doesn't participate, could support oil prices to reach levels observed in late April.

In terms of volumes, based on data by IHS Markit's Commodities at Sea, loadings from the US Gulf seem to have declined by around 8% since last month, but remaining above two million b/d. Meanwhile, China has been importing around 8.5 million b/d so far in May 2019, which translates into a decline of around of around 2.5% month-on-month. 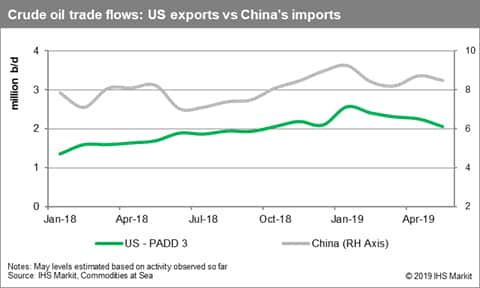 During the first 20 weeks of 2019, the US has been loading around 2,300 thousand b/d, with most of that getting absorbed by European countries, while South Korea is ranked first overall as a country importing from the US, with around 320 thousand b/d of US crude oil loaded since the beginning of the year. Canada and Latin America have been importing a significant percentage of US barrels as well, on average 270 and 210 thousand b/d accordingly. South East Asia and India have been the other major destination for US barrels, with around 225 and 170 thousand b/d loaded so far accordingly. Japan and China have remained at lower levels. During the first three quarters of 2018, the US loaded almost 300 thousand b/d with destination China. 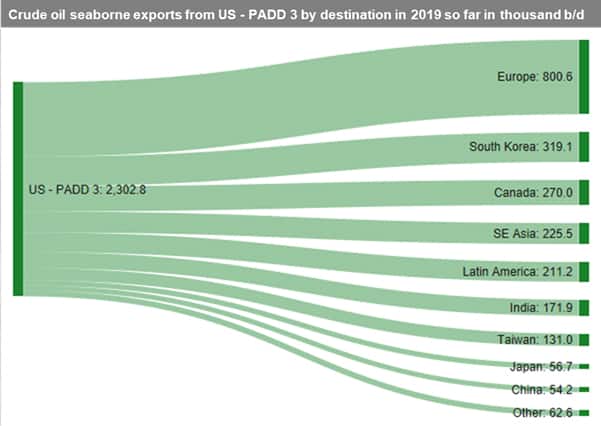