With continued uncertainty around Brexit, the IEA recently commented that a "disorderly Brexit" would affect global oil demand, as consumption is highly affected by global economic performance. Meanwhile, the Oil and Gas Authority (OGA) expects the country's crude oil production to decline to levels marginally below 950k bpd, from around 980k bpd that it was last year. Oil production, including natural gas liquids, increased 8.9% from 2017 to 1.09 million bpd. OGA also forecasts the downwards trend to last with output to reach 760k bpd by 2024, in parallel to the decline to be observed in capital expenditure during the same period (from USD 6.76 billion this year to USD 3.31 billion in 2024).

Focusing on the current year, performance so far might seem to be poor, with loadings on tankers deepening further in January and remaining below 800k bpd for a third consecutive month in February. In parallel to that, the Bank of England has been highlighting the consistent drop in investment in the UK since last year, with lower levels expected to follow. To an extent, this drop in investment has been driven by uncertainty around the UK's future trade deals, policy context and legal framework. Brexit has been included in the IEA's list of worrying market factors. The impact could be significant for oil demand, which has already been feeling the pressure of the US-China trade wars and the already declining productivity across Europe. 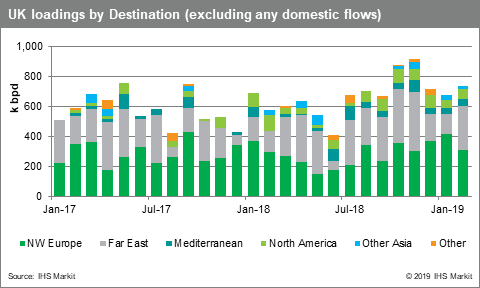 In terms of destination for UK crude oil, the Far East has absorbed significantly more last month, with the flows reaching 265k bpd from 139k bpd in January. NW Europe and the Mediterranean fell significantly, providing more space for China.