West African loadings seem to have increased by 4.6% month-on-month in May, but this wasn't enough to support Suezmax earnings in the region, as owners had to face the increasing competition from larger tankers. VLCCs managed to load almost a fifth more since April, but with total volumes still remaining below levels achieved in March. This meant less cargo for Suezmaxes to load, with a sharp decline to report since April, which reached 8.6% month-on-month. 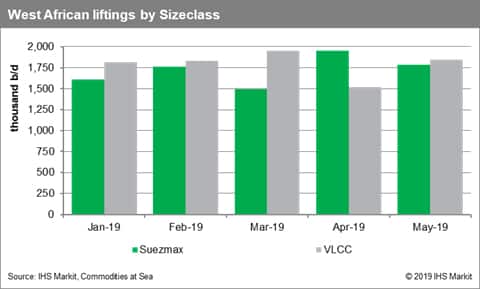 As recent data by IHS Markit and Market Intelligence Network suggests, the number of ballast vessels across the Atlantic has been increasing since mid-May. This added significantly more pressure to the spot market, as the ballast fleet of both VLCCs and Suezmaxes has been increased by 4.8% on average week-on-week since mid-May. The main driver behind this trend has been the rather strong loading activity for VLCCs in early May, both in West Africa and the Caribs (including US Gulf), which attracted a lot more ballasters to the Atlantic, since performance in the Middle East Gulf has been rather disappointing since mid-May. 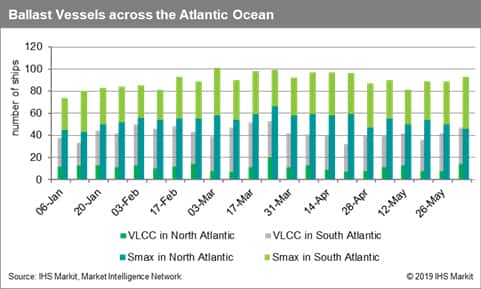 Focusing on flows from West Africa, activity in the freight market suggests there will shortly be an increase to observe, primarily in volumes heading to China, with India's market share slowing down. Petroineos has been recently fixing for the second half of June. Other charterers, including CNOOC and Day Harvest, have been active as well, having fixed VLCCs and Suezmaxes for eastbound shipments. Rates for VLCCs loading in West Africa have been under pressure, having fallen below USD 2.7 million from USD three million a couple of weeks ago, while Suezmaxes would currently get paid around USD 1.8 million. The VLCC "CHRYSSI" was fixed to load from Akpo and Egina for IOC, with laycan in the third decade of June, at a rate of just USD 2.65 million. Total has been looking to fix a Suezmax heading to the Far East by the end of this week. Some charterers have already been fixing VLCCs for WAF loadings in late June as well, just like Unipec that recently fixed the "TAI HUNG SAN" and the "LONG HU SAN" to pick up cargo around 27-30 June. The limited enquiry for West Africa to the UK continent/ Mediterranean pushed the Suezmax rates further down, with charterers like Repsol quickly taking advantage of the situation by securing the "MIKAELA P" to load from West Africa to Spain, around 15 June.

The US Gulf hasn't been absorbing a lot from the spot market around West Africa either, with the only exception being the "NORDIC SPACE" that will load in Nigeria to US Gulf or East Coast for Petroineos, around 17 June. Meanwhile, owners of Suezmaxes have been struggling with overcapacity in the European market as well, with some vessels picking up smaller cargoes, that Aframaxes would have typically targeted. After discharging 1.1 million barrels in Spain in late May, the "FRONT CLASSIC" was fixed to carry only 80,000t for Petrogal from Sidi Kerir to Leixoes, but still allowing the owner to generate reasonable earnings, which are estimated to have surpassed USD 530,000. This is a trend expected to last as cargoes across the Mediterranean currently tend to be smaller than 100,000t, best sized for Aframaxes. However, more Suezmaxes have been targeting the market, since rates still stand above USD 6.5/t.

Activity is still focusing on flows to Asia, both Far East and India, while there are still some requests for cross-Mediterranean volumes. Litasco stepped in, once the Novorossiysk-Mediterranean spot rate for Suezmaxes further declined and fixed the "BARBAROSA", with the loading expected around 11 June. The same company fixed the "RIO GRANDE" at USD 2.25 million for Novorossiysk to WC India, with laycan around 15 June. Vitol took the "AEGEAN STAR" from Mellitah to the Med, with loading between 7 and 9 June.

Another Suezmax, the "DONAT" was fixed by Total, to pick up cargo from CPC to WC India, after discharging in Portugal in late May. The rate agreed surpassed USD 2,250,000. 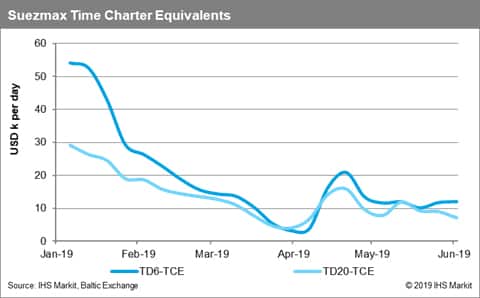 RT @IAPHWorldPorts: How will IAPH2022 #ClosetheGaps? We are excited to announce the #IAPH2022 all new agenda-setting format with participan…