Crude Oil Trade: Suezmax earnings, no matter how long the winter, spring is sure to follow

In early April, charterers were showing preference towards loading on Suezmaxes than on VLCCs, even for cargoes heading to India. This caused more confusion across the market, especially as activity remained at low levels. This pushed the lump sum rate for carrying crude oil from West Africa to west coast India deeper, marginally below USD three Mn for VLCCs and around USD 2.25 Mn for Suezmaxes. Rates to east coast India only stood USD 50,000 higher. Then, as the arbitrage between Brent and Dubai surpassed USD 1.5 and then 1.6 per barrel, more pressure was added, as Middle Eastern barrels looked more appealing to Asian buyers, dampening demand for West African grades. This pushed rates closer to USD 2.75 Mn for VLCCs and USD 2.15 Mn for Suezmaxes. The only positive has been the significantly improved Angolan schedule, which increased optimism among Suezmax owners. And of course, the fact that by the end of the first week, activity westbound got much stronger. 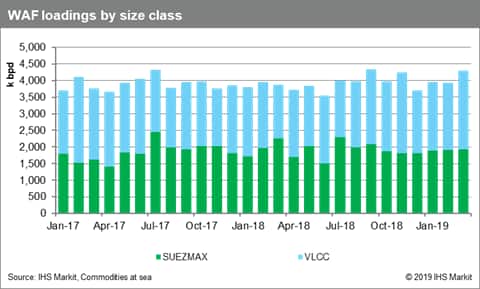 The number of fixtures for VLCC loadings during April's last week already stands at ten, typical for this region, while the first decade of May is already half gone. The uptick in shipping requirements for late April and early May, in parallel to the prompt loading schedule during the same period, suggests that sentiment could easily improve in the next couple of weeks. This supported owners who demanded more loadings during the upcoming weeks. As a result, Suezmaxes heading to the UK / Mediterranean and even the US Gulf managed to earn more, but without any massive gains since the beginning of the month. This was driven by the slow but rather steady increase of available tonnage within the region, which very quickly absorbed any requirements seen to date. This surplus made both sides expect any short upticks in rates not to last, however volatility can still translate into opportunities for both sides. 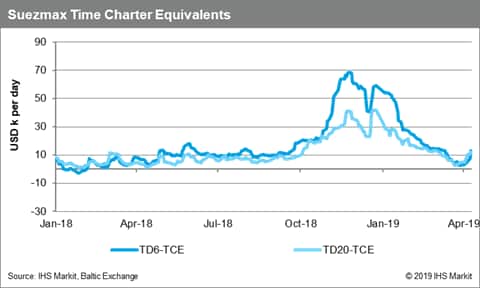 In terms of TCE rates, the market seems to have hit a floor in late March, with rates having now surpassed USD 10,000 per day once again. We don't expect levels observed in late 2018 and early 2019 to return within the next couple of weeks, but the market sentiment suggests that it won't be a surprise for the market to return to levels closer to what we experienced in February, when Suezmaxes made around USD 20,000 daily.

Another reason for the improvement in sentiment has been the available tonnage slowing down in the east Mediterranean, as more units loading in the Black Sea sailed East, allowing the rest of the market to take a breath. Moreover, some owners decided to send ballasters to West Africa, which further improved sentiment, as we saw the first signs of increasing activity across the Mediterranean.

The third week of April started with more fresh cargoes across Europe, which allow Suezmax owners to be much more optimistic as freight rates are expected to further improve.