Crude Oil Trade: South Korea's appetite for US crude increasing ahead of 2020

South Korea's crude oil imports from the US have increased by 150% year-on-year, with flows averaging 350,000 b/d between January and mid-October 2019, more than double the 140,000 b/d imported last year over the same period. Meanwhile, intakes of major exporters have dropped sharply since last year, with flows from Saudi Arabia down 2%, Russia 3.3% and Kuwait almost 11%. The country hasn't imported any Iranian barrels since early 2019 Q2.

October imports of US crude oil will approach but will not surpass the record high of 436,000 b/d achieved in July. Sanctions imposed by the US on Iran, together with China avoiding US crude due to the tension between the two countries, provided a lot of space for crude oil trade between the US and Korea to flourish since 2019 Q3. South Korean purchasers have been interested in Eagle Ford condensate to replace Iranian barrels, while more WTI Light and other light sweet grades of the US become more popular as we approach IMO 2020. 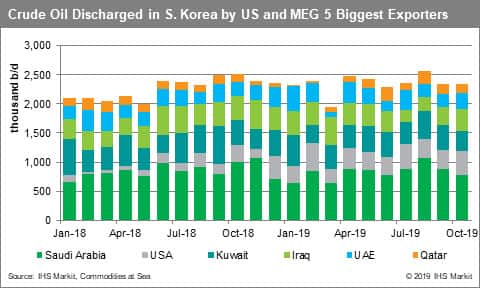 Crude oil flows from the Middle East Gulf to South Korea have been declining after the attacks on Saudi Arabia's Abqaiq processing facility and Khurais oil field last month. Korean imports from Middle East's five major exporters declined by more than 4% so far in October month-on-month and around 14% year-on-year.

Most of the country's refiners start announcing their strategy for 2020, with Hyundai Oilbank planning to commence production and supply of very low sulphur fuel oil from early November. The refiner has been importing volumes of heavy, sour grades such as Mexico's Maya, Kuwait export blend, Iraqi Basrah Heavy and US Mars, according to IHS Markit Commodities at Sea. Its compatriot, refiner SK Energy increased its production of gasoil and gasoline ahead of 2020. Meanwhile, S-Oil, the country's third-largest refiner, whose top shareholder is Saudi Aramco, expects refining margins to strengthen from the end of 2019 onwards, on the back of inventory build-up ahead of implementation in advance of IMO 2020.