There is no doubt that Saudi Arabia is still determined to support oil prices, even if its production would have to be further cut. The country's energy minister recently expressed the Kingdom's plans to convince the cartel's other members and their allies into a deeper production cut during the next OPEC+ meetings, to be held in December.

Reduced Saudi production output has remained, since the end of 2018, a strategy followed by Russia and most OPEC members such as the United Arab Emirates. Their effort hasn't been as successful as they wished, even if Iranian exports have collapsed, together with a sharp decline in Venezuelan output observed. Brent moved below 60 USD per barrel last week. The market's sentiment is heavily affected by the escalating tension between Washington and Beijing, with fears that the trade war between the world's two biggest economies will disturb global economy's performance and as a result demand for oil as well. Meanwhile, as increasing risks threaten demand growth, supply is set to further expand, as the US shale production keeps on rising, with a surplus to be developed next year.

OPEC would have to reduce production by around one million b/d for prices to be supported close to 60 USD per barrel for long. This would be close to 1% of the current global supply. The market is sceptical regards Russia's willingness to agree on additional production cuts, especially as some of the major fundamentals remain quite positive. Inventories are slowly tightening, while the US shale boom might be approaching a turning point, with some analysts already looking rather pessimistic for 2020. With share prices of US companies remaining weak, improving cash flows will be more important than further increasing output. Downwards pressure against prices has been primarily driven by the weakening of currency of China and the country's economic growth slowing down. And of course, the market's expectations for a surplus in 2020, as Non-OPEC barrels will continue rising faster than demand.

Action will need to be taken by Saudi Arabia sooner than later to maintain the market around 60 USD per barrel. Stronger oil prices will be required for Riyadh to proceed with Aramco's IPO. Russia's participation can't be taken for granted, even if President Vladimir Putin seems to value the relationship established with OPEC, as several Russian companies already face difficulties due to the production cuts. 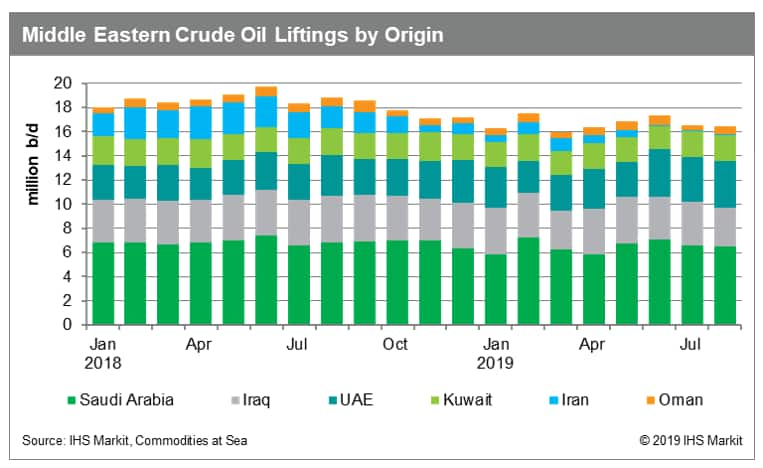 Middle Eastern crude oil liftings fell sharply in July, with overall volumes down by more than 800 thousand b/d. This is a decline of around 5% month-on-month. However, volumes have stabilised in August so far, with current volumes standing only marginally below last month's totals, close to 16,500 thousand b/d. It has been primarily Saudi Arabia's loadings that have been declining, while Iranian exports remain below 100 thousand b/d. 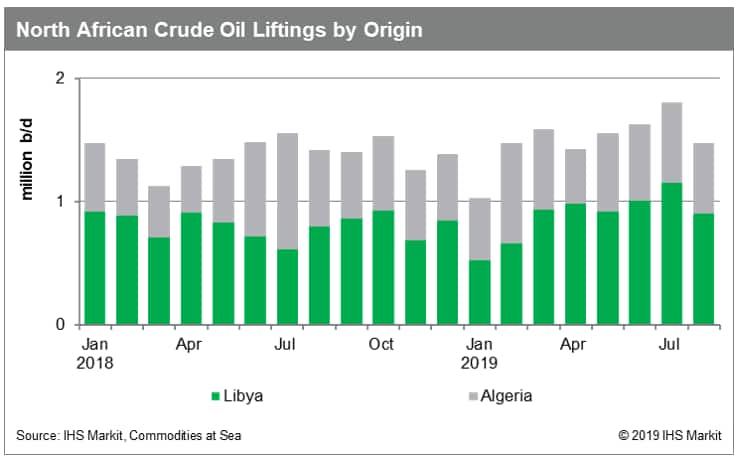 IHS Markit's Commodities at Sea shows a similar decline in volumes loaded in North Africa as well. The activity has been under severe pressure in Libya, with a month-on-month decline of 22% to report so far in August. However, levels are now expected to return closer to normal levels, as the country's oil production is approaching normal levels once again. Meanwhile, Algeria recorded significant additions in July, but the positive trend doesn't seem to last, as volumes in the first half of August have been down sharply. 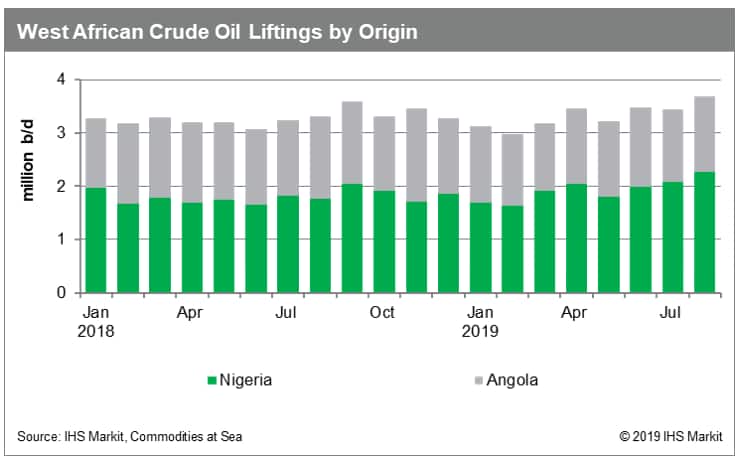 In contrast to what has been happening in the Middle East Gulf and West Africa, both Nigeria and Angola have been loading more crude oil on tankers so far in August, with overall quantities up by 7.3% month-on-month. However, the Angolan loading schedule for September and October has been declining. 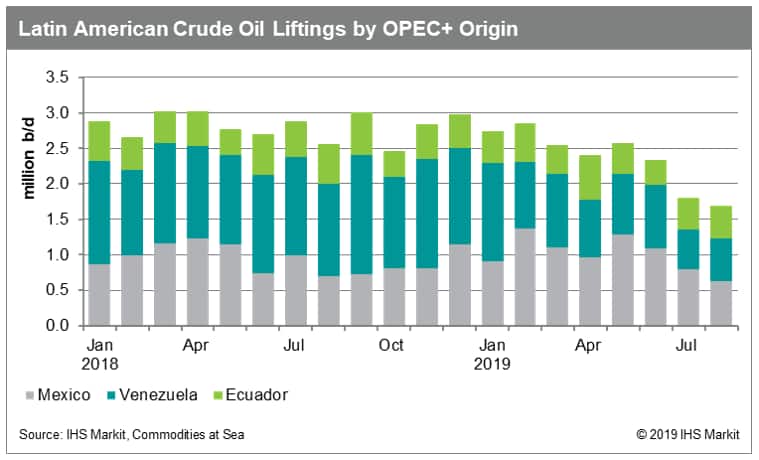 Focusing on Latin American members of OPEC+, volumes from Venezuela seem to be slowly recovering, with August loadings currently standing 7% higher than July's levels, while activity in Ecuador is unchanged. It's interesting to note the sharp decline in Mexico's liftings so far, with barrels loaded on ships during the first half of August down by 20% month-on-month.