Saudi Aramco will take over a fifth of Reliance Industries' refining business. It has become clear that after strengthening its market in China, Saudi Arabia is now looking to deepen its exposure in India as demand from the latter is set to increase. Saudi Aramco has agreed to supply around half a million b/d to the Indian refiner. This is the largest foreign investment ever in India, with the value of the business estimated to surpass USD 75 billion, including debt.

Officials of the Indian company visited Saudi Aramco's headquarters in Q1 2019, with Saudi Arabian executives frequently travelling to India since the beginning of this year. Saudi Aramco commented that the acquisition will allow the company to increase its capacity and diversify its international market operations. Investments proceed despite the difficult first half of 2019 for Saudi Aramco, whose net income has been hit by lower oil prices. The decline reached 12% year-on-year, but is still the world's most profitable company. 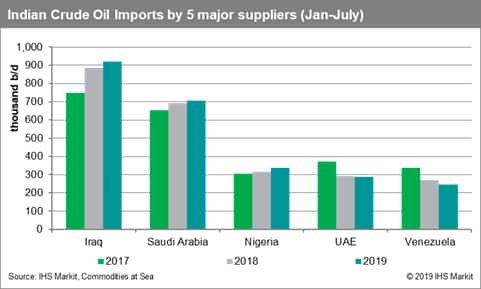 Focusing on crude oil trade flows, as shown in IHS Markit Commodities at Sea, India has been importing more than 700 thousand b/d from Saudi Arabia in 2019, with the Middle Eastern supplier ranked second. Volumes from Iraq to India have been increasing this year as well, with a growth of 4.2% year-on-year, against growth of 2.2% observed in flows from Saudi Arabia. The combined market share of the two countries now represents 41% of Indian imports, higher than levels close to 38% in 2018 (January-July). To a great extent, the two countries seem to have been replacing the gap created after the collapse of Iran and Venezuela. However, the situation seems to be changing in favour of Saudi Arabia since June, as depicted in the chart below. 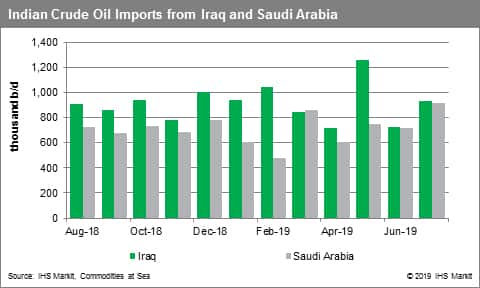