It came as no surprise that Saudi Arabia's oil revenue declined 5% year-on-year, as the OPEC+ production cut agreement has been shaping the country's crude oil output. But meanwhile, officials have been increasing capital spending to support the struggling working classes and stimulate the sluggish domestic economy. This resulted in the budget deficit widening further, after reaching USD 8.9 billion in the second quarter of 2019. GDP growth is expected to reach 1.7% this year.

Crude oil liftings from Saudi Arabia have been around 6,500 thousand b/d during the first half of 2019, around 6.5% down year-on-year. July moved closer to seven million b/d, but August is expected to be lower. 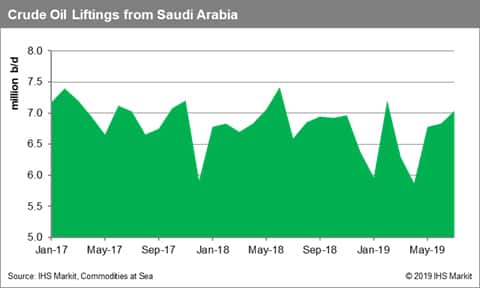 Saudi Arabia is committed to the production cuts agreed, with its Energy Minister Khalid al-Falih having made it clear to Russia that his country will comply with the deal by the end of the first quarter of 2020. It's a priority for Riyadh to restore "world oil reserves to their natural range", as he commented on Twitter in early August. He added that the two countries will continue to meet to "ensure further progress, partnership, investment development, and mutual trade". These statements followed his meeting with Russian Energy Minister Aleksandr Novak in Moscow. Along with Saudi Arabia, Russia has been another struggling economy, heavily relying on oil exports. Russian President Vladimir Putin will visit Riyadh in October to discuss bilateral relations. Dialogue seems to have been healthy between two of the major oil producers. 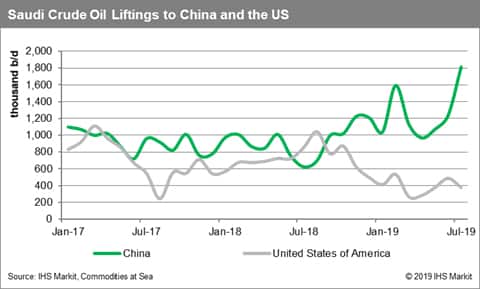 Saudi Arabia has also been focusing on further strengthening its relationship with China as well, the world's biggest importer of crude oil. Trade flows from Saudi Arabia to China have surged in the first seven months of this year, as data by IHS Markit Commodities at Sea shows, while flows to the US have collapsed since a year ago. This is during the same period where China has almost halted all imports from the US due to the ongoing trade tensions between Washington and Beijing. Volumes decreased by around 80% year-on-year during the first seven months of 2019. Meanwhile, flows from Saudi Arabia increased by almost 46% year-on-year. 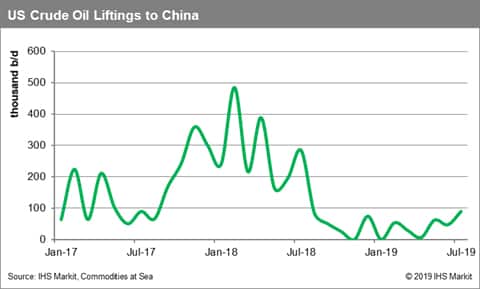 China's additional appetite for Saudi Arabia crude oil during the last couple of months has been primarily driven by the requirements of the new refinery complex in Dalian. Having started operations in mid-May, the refinery has signed a contract for Saudi Aramco to supply 6.5 million MT of crude oil during 2019. Similar projects have been launched or scheduled, in some cases with Saudi Arabia having a share in the new schemes, with all of them scheduled to start operation within the next five years. China is heavily relying on imported crude oil, with the ratio currently standing above 70%. Saudi Arabia might be losing part of its global market share to the US, but it has significantly improved its position in the Chinese market.

Meanwhile, Saudi Arabia has lowered pricing for September sales of all crude types to Asia but raised prices to Europe and the Mediterranean. Prices for all grades to the US were kept unchanged. This could support another increase in flows from Saudi Arabia to China and the rest of Asia.