Saudi Arabia has continued shipping crude oil to Japanese refiners without any major impact observed so far after the attacks on Saudi Arabian infrastructure. The recovery has been impressive, with Saudi Arabia having fully met nominated volumes so far, with November ship loadings confirmed to take place as requested and no changes in crude grades. Some loadings in early October were subject to change grades, but this is no longer the case.

According to IHS Markit Commodities at Sea, Japan imported 1.16 million b/d of Saudi crude oil in October, with a growth of 6.7% month-on-month to report. Total imports surpassed three million b/d, after a sharp decline in September. This will bring imports back to normal levels. Japanese imports are now marginally lower than a year ago, with a decline of only 0.15%. Quite interestingly, the country increased its reliance on the Middle East Gulf, by quickly importing more from the UAE and other regions across the Gulf, but still avoiding Iranian barrels. 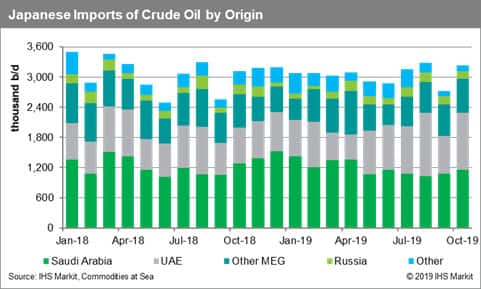 The increased crude oil exposure of Japan from the Middle East Gulf explains the country's decision to send ships to the region to protect commercial oil vessels. However, Japan will not join the US-led coalition already protecting commercial shipping in the region.

Moreover, Japan and Saudi Arabia agreed to renew a joint crude oil storage scheme in Okinawa which was due to expire in October. This will allow trade between the two countries to continue flourishing, providing quick and easy access to other key customers of Saudi Arabia across the Far East.

Meanwhile, Tokyo can ensure that the supply of Saudi Arabian crude oil will remain stable amid increasing geopolitical events. Tokyo has been paying for storing Saudi Arabian oil at leased storage tanks in Okinawa under the "Joint Crude Storage by Producing Countries", agreement with Saudi Aramco. In return, Japan has priority to the crude oil stored at Okinawa for commercial purposes, which can reach 8.18 million barrels, in the event of an emergency.

Crude imports from Saudi Arabia average 1.19 million b/d so far in 2019, accounting for more than a third of total oil imports. Saudi Aramco has shipped crude oil cargoes from the storage in Okinawa twice so far this year, including a rare Arab Light crude cargo which was shipped to a PetroChina refinery in central Hebei province in mid-October.