Crude Oil Trade: Russia’s liftings down, but for how long as Saudi Arabia increases exports?

Russia's seaborne exports seem to have started to decline, even if the change is only marginal. Loadings during the first three weeks of May reached 5,060 thousand b/d on average, less than 1% lower than a month ago. May has been a rather bad month for the country, as its overall exports were hurt by the Druzhba pipeline and remains mostly shut after the discovery of contaminated oil. This has been one of the country's main export routes to Europe, as it handles a quarter of Russian oil exports. This will have caused an interesting development in seaborne exports. As data by IHS Markit's Commodities at Sea suggests, volumes from the Baltic Sea increased by around 14.5% in May, while volumes coming from the Black Sea decreased by almost 8% month-on-month. 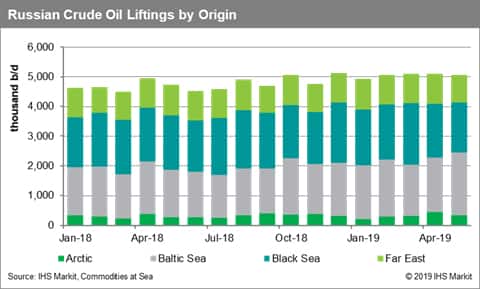 Russia seems to be following the OPEC+ agreement, since we haven't seen any major addition to its output since early 2019, which has contributed to support low oil prices until recently. Recent data made available suggests that the OPEC+ plan might have hurt the Russian economy. This will add more pressure for President Vladimir Putin if an extension is agreed during the next OPEC+ meeting, which is expected to take place in late June, unless postponed to July, as some officials have been recently suggesting.

Higher crude oil prices typically mean additional revenue for Russia, but meanwhile production cuts also mean that the country's biggest industry isn't operating at full capacity. The decision to be taken is simply between faster economic growth in the short-term, even if this damages the alliance of the country with Saudi Arabia, or stabilised prices of crude oil in the long-term.

The country's perfomance during the first quarter of 2019 seems to have been affected by its participation in the OPEC+ agreement. The situation could be easily improved in favour of Russia, if production increases as most domestic crude oil producers are willing to pump more, and assuming oil prices remain relatively strong even if Russia decides not to extend the deal.

Russia's GDP grew only 0.5% in the first quarter, much lower than earlier anticipated and the growth of 2.7% achieved during the last quarter of 2018. It was during this period that the country's crude oil output reached a record of 11.45 million b/d. Russia, which last year agreed to reduce its oil output by 228,000 b/d, has been talking about relaxing the cuts instead of extending the agreement, as the cartel would prefer.

President Putin has been stating that cooperation with OPEC+ will continue, but some of his comments made last month suggest a rather different approach. Moscow now seems to consider "plans of companies to develop new deposits", adding that "the production shouldn't stop, investment should come to the sector, otherwise that may create problems both for us and the global energy market". Growth of investment in hydrocarbon production and mining has been kept at low levels compared to the previous year.

OPEC seaborne exports seem to have remained at low levels, similar to those observed since early 2019. But it's quite interesting that in parallel to the further decline of Iran and Venezuela, volumes from Saudi Arabia seem to have increased marginally so far in May, filling part of the gap created after the end of the US waivers. 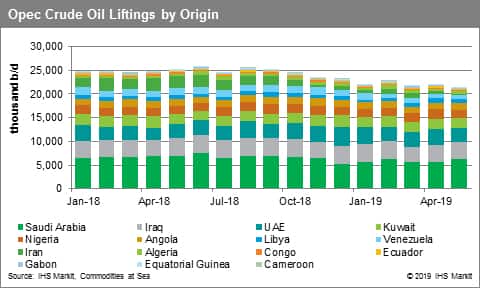 Focusing on Russia's oil producing companies, Rosneft, which has been pumping almost half of the country's production, warned about possible delays in some projects amid uncertainty over the OPEC+ deal. The company's domestic oil tender fell 6% in price, mainly driven by demand affected by infrastructure bottlenecks due to the contaminated oil crisis. Oil for domestic deliveries in June has been sold down 6% from May.

As uncertainty raises and prices for Russian oil are under pressure, Moscow would typically prefer to strengthen its market share in global supply. Energy commodities account for almost half of Russia's state finances. The increase of oil prices, with each barrel costing approximately USD 10 per barrel, is estimated to have added about RUB six trillion of additional revenue during the last couple of years. All extra revenue from oil prices surpassing USD 40 a barrel ends in a rainy-day fund, currently worth almost USD 60 billion, or about 3.6% of Russia's GDP.