As China's economic growth is expected to continue to slowdown, Russia has started focusing more on the Indian market. The two countries recently announced plans to increase Russian exports of oil, gas and coal to India. This will allow India to diversify its energy supplies away from Middle Eastern producers. The country has been importing more than 80% of the oil consumed, with most of these barrels coming from the Middle East. As Indian demand is set to expand, and price volatility has been high this year, it makes sense for the country to work with more suppliers. Russian exports to India have been limited so far, but they have been rising fast recently. Especially after the end of US sanction waivers on Iranian barrels, with a very big gap to be filled from other producers, primarily Iraq and now Russia. ONGC has been planning to secure up to one million b/d of Russian fields.

As data by IHS Markit Commodities at Sea shows the volume of Russian crude oil imported by India increased in the second quarter of 2019, but with a big correction to observe since. However, Russia still has a very small share in the Indian market, but with the potential to increase fast. Flows from Russia to India could increase significantly in the last quarter of 2019, potentially above 150,000 b/d. 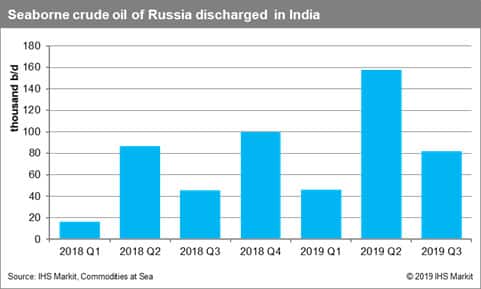 Meanwhile, the central bank of Russia published a new forecast, with references to extreme scenarios for oil prices. According to it, oil prices could fall to as low as USD 25 per barrel next year, driven by lowering demand in parallel to global economic growth slowing down further. This would have a huge impact on Russia's inflation, which could increase up to 8% next year, with GDP growth dropping to 1.5%. As Russian currency typically weakens when oil prices fall, the country is more flexible with lower oil prices compared to other exporters. Russian oil companies will continue receiving revenue in dollars, while paying expenses in rubles. Meanwhile corporate taxes will be pushed much lower, in parallel to falling oil prices. Russia's budget for 2019 was based on USD 40 per barrel of oil. 2019 budget breakeven stands at a Urals price of USD 49.20 per barrel, as stated in August. This is the lowest in at least a decade.