Saudi Arabia and most other OPEC members have proved rather decisive so far in terms of output cuts agreed in the last OPEC+ meeting, with most of them having already met their goals. But Russia, which has participated in the deal, doesn't seem to have followed the reduction policy, with its exports and seaborne flows still looking rather robust. Most recent data available through Commodities at Sea suggest that the volumes have been increasing since January, with the first third of March having surpassed five million bpd. Most of the growth is driven by additional volumes observed in the Baltic Sea, with recent loadings flirting with levels close to two million bpd. This would be an increase of almost 18% for the first quarter of 2019, year-on-year. The growth in the Black Sea has only reached 8% compared to Q1 2018, most probably because of the rather bad weather during the first two months of the year together with the extremely high congestion in the Turkish straits, which did not allow for many vessels to approach the region on time. 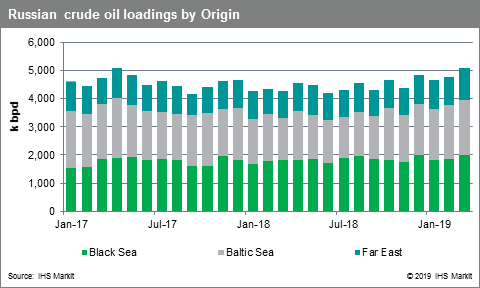 March might become the month during which this trend will change, with Russian officials suggesting that the country will meet all goals promised before the next OPEC+ meeting in April. Earlier this month, during an energy ministry meeting, the country's oil majors confirmed that they plan to proceed with the production cuts as agreed, as Vagit Alekperov, president and CEO of Russian oil producer Lukoil commented recently. The Russian companies seem to be ready to fulfil their commitments. There's no doubt that the reduction to be implemented might not be that popular at least across some of the country's producers, such as Rosneft, whose CEO Igor Sechin openly criticised Vladimir Putin and the OPEC+ deal.

According to Lukoil, there has been no discussion on production levels for the second half of 2019 so far, with any decision to be only taken after April's meeting with OPEC members. The current OPEC+ deal will remain in place at least until June.

According to Alexander Dyukov, CEO at Gazpromneft, it won't be fair to draw any conclusions about the future after June since all countries will need to first prove that they achieved their respective reductions.

Russia would need to quickly speed up its oil production cuts if the plan is still to reach its share of the OPEC/non-OPEC output reduction by end of this month, as the Russian Energy Minister Alexander Novak recently noted.

As the leading origin of crude oil currently on water, Russia has promised to reduce its crude oil production by around 230K bpd, which would be the highest among all non-OPEC cuts agreed. This would bring total output close to 11.19 million bpd, almost 2% lower than its production in October 2018, which stood at 11.42 million bpd, a record high for the country's post-Soviet output.

The limited compliance with the agreement so far has been attributed by Moscow to the rather harsh weather and geological conditions suffered during the current winter, which hasn't allowed oil production to quickly adjust.

This hasn't been ignored by Saudi Arabia and other OPEC members, with the Kingdom's energy minister, Khalid al-Falih, recently expressing his concern as Russia has proceeded with the cuts much slower than he would have wished.

In terms of direction for Russian exports, Europe has been dominating the market, with its market share having reached 70%, for the first time since February 2018. The ongoing increase in flows from Russia to the rest of the continent started in December, primarily supported by the decline in flows from other producers, like Iran, to Mediterranean importers. 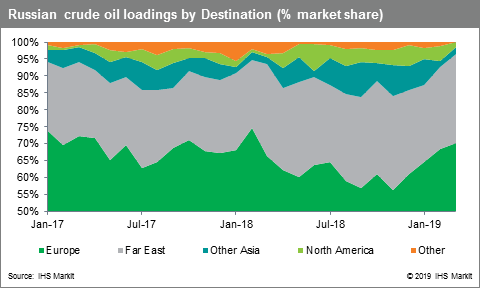