A sharp decline was observed in late May, with Brent standing above USD 63.6 per barrel on 3 June, noon (UK time). The market seems worried about the impact of the increasingly aggressive US trade policy which could quickly trigger a sharp slowdown of the global economy. The tension between China and the US is expected to last, especially after the collapse in trade talks with Beijing stating that it won't be pressured into any concessions. Meanwhile, Saudi Arabia has become more confident about the duration of the OPEC+ agreement on production cuts, with its Energy Minister Khalid Al-Falih recently emphasizing the role of the cartel in stabilizing the oil prices beyond June.

Market sentiment is now clearly bearish, with oil prices having suffered huge losses in such a short period, reaching up to a fifth of the levels achieved in late April. Concerns about the instability in the Middle East Gulf and the rather probable scenario of future disruptions across some of the largest producers and exporters of crude oil only drove short-lasting spikes in the prices in early May. One of the big questions now is the decision Vladimir Putin will have to take later this month. It's looking more probable, Russia will continue participating in an extended OPEC+ production cut agreement.

Apart from the tightening supply, the global market is realizing that the risk of a global slowdown might affect demand, as the market balances look very fragile. Assuming Washington proceed by imposing more tariffs on exports, the next global recession might not be far away. However, the downward movements cannot be justified based on just current market fundamentals, which remain quite strong. Even US crude stocks had the first drawdown reported in several weeks.

Focusing on Saudi Arabia, the country's liftings have increased in May, having reached seven million b/d, with Japan, Korea, India and other Asian importers being the major drivers, after the end of waivers on Iranian barrels. Saudi Arabia recently announced July prices for its Arab Light grade for Asian customers. Prices went up by USD 0.60 per barrel, with the premium to the Oman/Dubai average standing at USD 2.7 per barrel. However, OPEC's oil production is estimated to have dropped to a four-year low, which marginally surpasses 30 million b/d, with Iranian exports having fallen below 500 thousand b/d. 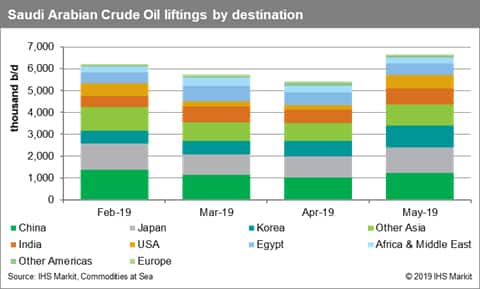 Despite OPEC's production cuts still in place, there hasn't been any major oil shortages so far, to an extent due to the planned maintenance period across Asia, with several refiners having shut down huge parts of their capacity, which combined is estimated to account for 2-3 million b/d. This is expected to continue throughout this month, causing global demand to look marginally lower. Most of the crude oil imported by Asian refiners originates in the Middle East, with some increasing flows of Arabian sour medium crude against light sweet crude from the US. Focusing on Chinese crude oil imports, a new record was hit, as volumes surpassed ten million b/d, with a massive year-on-year growth of 1.2 million b/d to report, suggesting that China's demand stands at healthy levels, at least for now. Seaborne imports have increased month-on-month, as depicted in the chart below. However, crude oil loaded with destination China hasn't managed to reach volumes last seen in 2019 Q1. 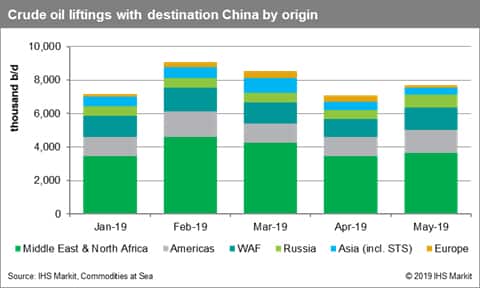 RT @JOC_Events: At #TPM21: When will the traditional calm return to the #trans-Atlantic? Holger Oetjen of @HapagLloydAG and Alison Leavitt…

How can data management be used to support digital transformation and unlock efficiencies in maritime supply chains… https://t.co/HjZF6yPrzk