OPEC seems to be determined to do all they can to support crude oil prices, with their production having dropped further in December. There are still some members among the cartel not respecting their quotas, with Saudi Arabia stepping in to compensate for other producers. Crude oil shipments have remained below 23 million b/d since July, as data shown by IHS Markit Commodities at Sea. 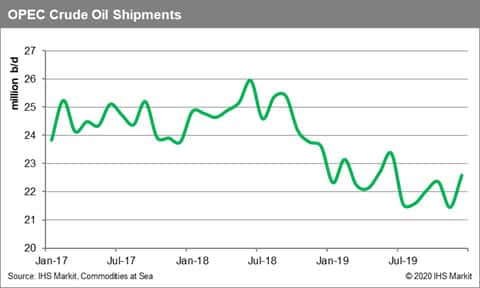 Saudi Arabia has been overcomplying so that the cartel can achieve the quota agreed. This, together with the collapse of Iran after the US sanctions, has kept crude oil shipments of OPEC from the Middle East close to 16 million b/d since early 2019. Iraq has been marginally above quota, with Nigeria having been the other country causing headaches to OPEC, even if they have recently moved closer to compliance. 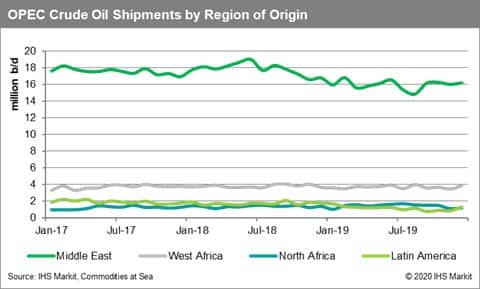 At OPEC+'s last meeting in early December, it was decided for the current cuts to be deepened further by 500,000 b/d within the first quarter of 2020. The cartel has been expecting global demand to weaken in 2020. Meanwhile, uncertainty around the safety in the Middle East Gulf caused panic earlier in January about potential supply disruptions. With the US and Iran in a 'de-escalation mode' since, at least for now, crude oil prices were pushed down yet again to levels last seen in mid-December.

Time will tell what will follow after March 2020, with all eyes on OPEC's partners participating in the production cut agreement, primarily Russia. Once the current deal expires, these producers will have to consider the fundamental outlook of the oil market, with a surplus on the horizon. There is no doubt that the market will remain nervous.