Crude Oil Trade: OPEC need to cut more to support prices, although figures from August suggest an increase in shipments

Oil prices have been under more pressure since early September, with OPEC expected to meet next week to discuss how prices could be supported. Saudi Arabia seems to be determined not to allow prices to collapse once again, even if it needs to sacrifice part of its market share. However, both production and shipments seem to have increased last month, with Saudi Arabian loadings up 13% since July. The OPEC+ cut output deal is still in place, with most countries having surpassed their commitments, which hasn't proved enough. OPEC's shipments were down 6% in July compared to June, but growth reached 9% in August month-on-month. Meanwhile, the potential impact of the US-China trade war on oil demand adds more pressure to the market. 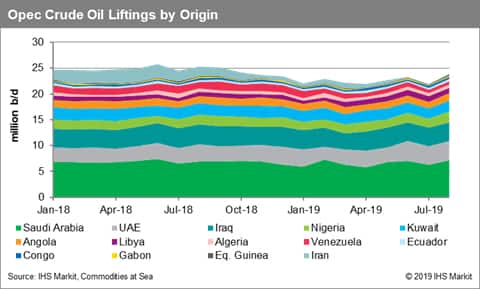 However, this trend might not last for long, as Saudi Arabia still focuses on selling Aramco shares, with higher oil prices considered the major target to be met. The Kingdom will most likely proceed with further cuts in the months ahead, as the current price environment could risk the success of Aramco's IPO.

What other members of OPEC decide to do is a totally different story, with Nigeria having expanded its shipments by more than 20% in August, month-on-month. Levels have surpassed 2.1 million b/d, partially due to some delays in late July's loadings. Overall, OPEC's oil shipments stood at 23.8 million b/d, the highest since November 2018, according to data by IHS Markit Commodities at Sea. 60% of the barrels added since July came from the Middle East Gulf, while Nigeria alone was responsible for around 20% of the growth, and Angola close to 12%. Flows to the US remain quite low year-on-year, while Asian importers, primarily China, further strengthened their market share.

Libyan shipments dropped below one million b/d, with a decline close to 14.5% to report month-on-month. However, a recovery is expected in September, as production returns quickly back to normal levels. Algeria increased its shipments by around 8% since June, while Iran only managed to add 70,000 b/d since a month ago.

Moving to non-OPEC producers participating in the production cut deal (OPEC+), Russia also increased its production and shipments in August, but September levels are expected to be much lower. Mexican went up only marginally.