In 2019 to date, suezmax vessels have proved rather sensitive to market volatility. In the European market, rates to move cargo from the Black Sea to the Mediterranean have declined during the last couple of weeks, currently standing close to USD 10,000 per day. Charterers have gradually pushed the market down and in-turn gained the upper hand on owners. But the situation seems to be different in West Africa, however without any miracles to report. 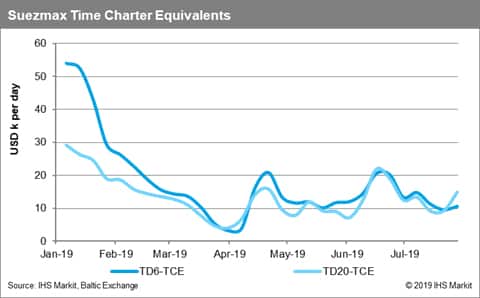 Fundamentals have been affected by the performance of VLCCs exposed in the region, with the overall sentiment and rates recently beginning to improve as owners reposition their ballasters according to news and expectations, as we approach autumn. The last part of the summer has usually been firmer than early summer months, providing more space for optimism to develop. Activity remains low but not disappointing for now, as the recovery of VLCCs usually drives an improvement for suezmaxes as well. Without doubt, dynamics are not the same, but as there are still simply too many units within this size segment out there, demand is not expected to change dramatically.

Charterers have been fixing last cargoes for the end of August and early September, with Repsol having recently booked a couple of ships for loadings from West Africa to Spain and from Sidi Kerir to Spain. Activity in Europe has been limited overall.

As data by IHS Markit Commodities at Sea shows, demand hasn't changed much lately for suezmaxes, with the segment having carried around 225 million barrels of crude oil since late April. Any spikes or falls do not last for long, with the market balancing quickly due to the plethora of open vessels made available. 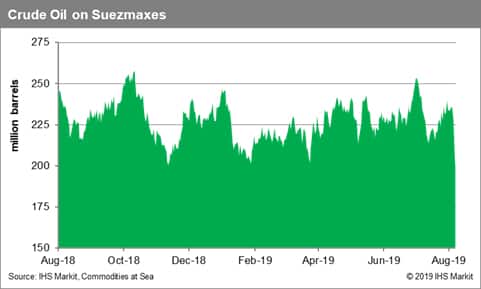